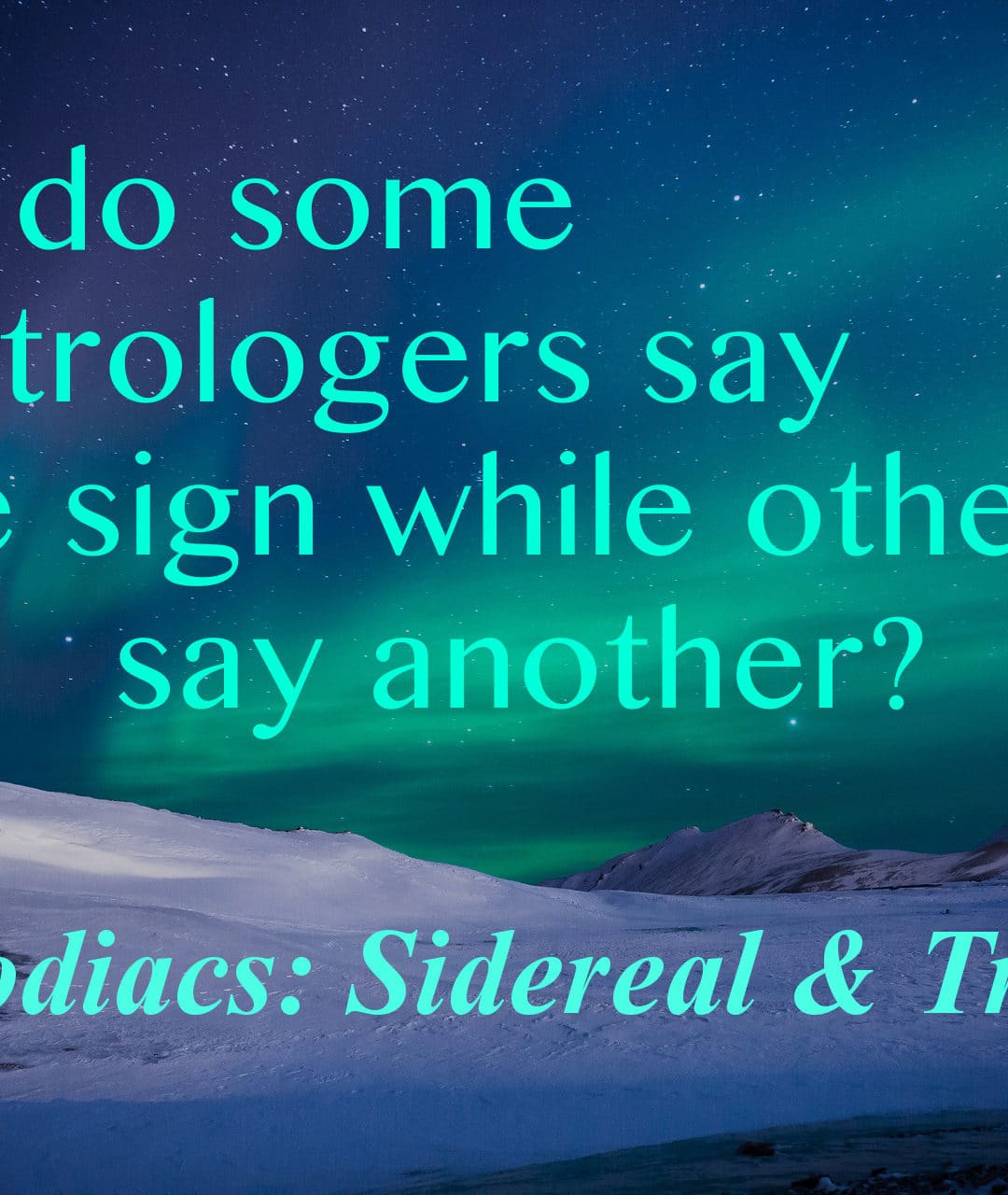 Almost every month I get a few responses to my blog or newsletter with people telling me I have gotten it wrong stating where the full Moon is. “It’s not in Pisces, it’s in Aries! That’s what my moon calendar says and that’s what all the other astrologers say.” What people don’t realize is that I am using the astronomical zodiac, while most Western astrologers use a different zodiacal system, one that does not line up with what we see in the sky.

I approach astrology from the Vedic tradition, called Jyotish, “the science of light,” commonly called Vedic or Hindu astrology. Most Vedic astrologers, myself included, use the sidereal, “star-based” zodiac, for calculating where the planets are. A zodiac is a system, or set of reference points, for locating where things are in the sky. It’s not simply the twelve constellations as we see them. The sidereal zodiac is the zodiac that correlates most closely with how we actually see the stars and planets in the sky from Earth. Western astrologers, who get a lot more press, generally use the tropical zodiac as a reference system. This is a different celestial measurement system, with reference points based on the seasons, not on how we see the planets and constellations from Earth.

For example, when I wrote that we’re experiencing a full Moon in Pisces today (Oct. 5, 2017), some people write to me and say “no, it’s in Aries!” That is what Western astrologers (and many popular calendars), will tell you, basing their calculations for the Moon on the tropical zodiac. But you can look at this astronomy-app screenshot from right now (or look at the sky, tonight) and see that the Moon is actually still aligned with Pisces, from our perspective here on Earth. You can compare this astronomical image to the Vedic and Western charts for today, below. Check out this online planetarium that will show you what is overhead in the sky right now, or at a given time. Makes it easy to see what I’m talking about! 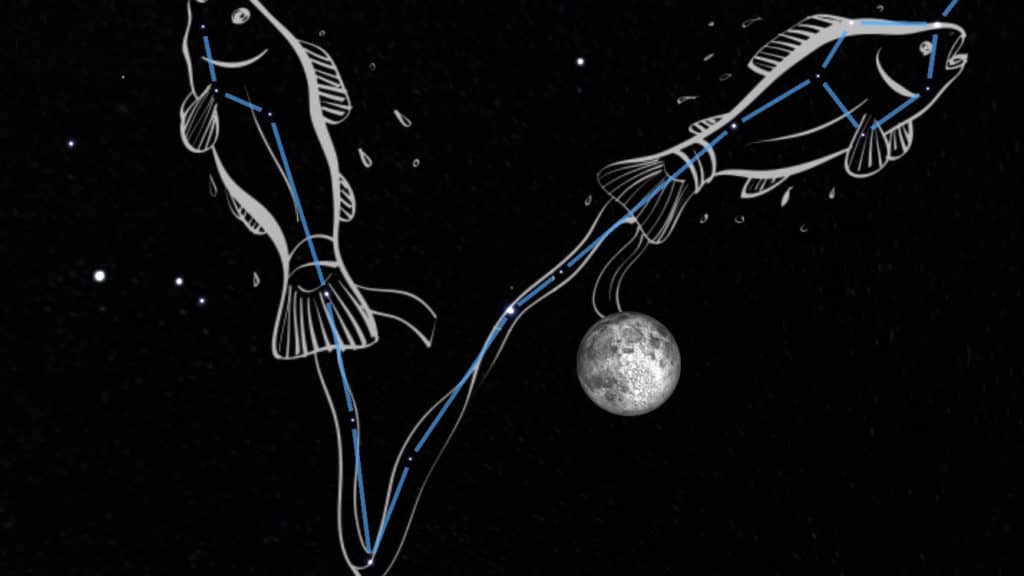 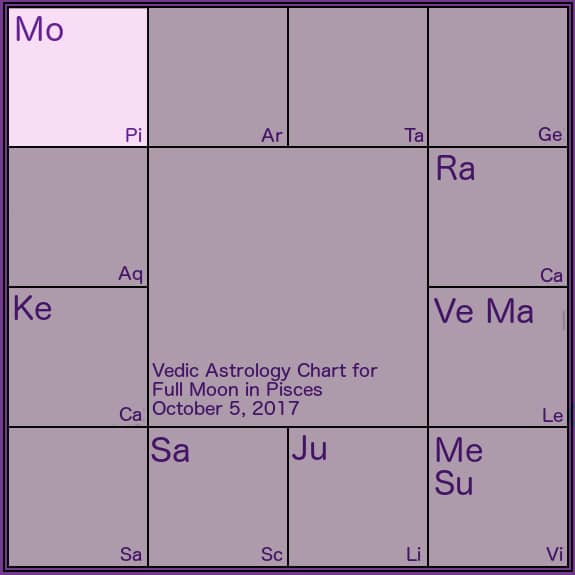 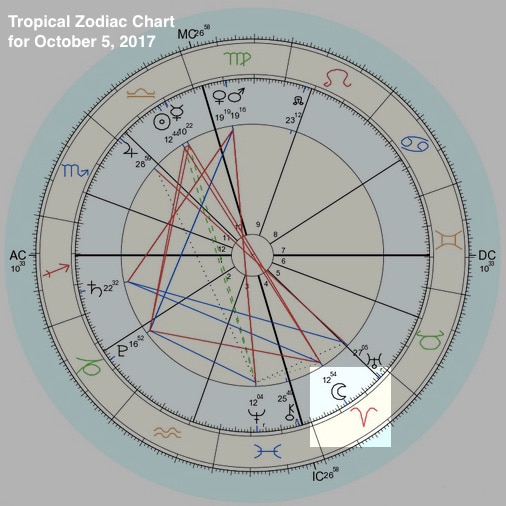 If you live in a place where you can see the stars against the backdrop of the full Moon, I also encourage you to go outside and look at the sky and identify the constellations tonight, and on each full Moon, and you will see what Vedic astrologers are talking about. After all, astrology originated from star-gazers paying attention to the patterns that came with the movement of the stars and planets (called gola, or observation, in Jyotish).

So, what happened? A few thousand years ago, the two zodiacs lined up. All astrologers and astronomers could calculate that the Sun entered Aries’ part of the sky around March 21st, the spring equinox (hence this became the common zero-degree starting point of the zodiac).

Because of the wobble of the earth, however, over time the perspective from earth has shifted. The location of the fixed stars behind Sun on the equinox (or any other day), actually shifts eastward about one whole zodiac degree every 72 years. That is to say, if you could see the Sun and the stars simultaneously on March 21st of this year (or if you study a modern astronomical calculation), you would see that the Sun is near the beginning (approx. 7°) of sidereal Pisces on the spring equinox:

The Western school of astrology at some point decided to “fix” the tropical zodiac, so that what they call “Aries (the zodiac sign)” is the first 30° longitude of the sky that the Sun traverses, beginning on the spring equinox, regardless of its relationship to the fixed stars of the constellation Aries that we see in the sky. Hence, wherever the Sun aligns on the spring equinox, that part of the sky will be designated as 0° Aries, even though it is not the visible constellation of Aries. Because the fixed stars have been slowly shifting over thousands of years (often called the “precession of the equinoxes”, the Sun does not align with the constellation of Aries until mid-April in modern times.

Because the fixed-stars zodiac is shifting “backwards” each year, and the Sun on the vernal equinox is now at 7° Pisces, and all of the planets in a Vedic chart are measured as being about 23° behind where they are in a Western chart (about ¾ of a sign behind). As a result of this, about ¾ of the time, Vedic astrologers will cite a Full Moon or a planet in your birth chart as being in a different sign than what you have commonly heard from the more mainstream Western/tropical perspective.

This is very interesting when you look at your natal chart, because about ¾ of your planets will be in different signs in your Vedic chart than they were in your Western. The Sun does not transit through sidereal Aries from March 21st to April 20th, but from April 13th through May 14th. The Vedic sidereal natal chart is a representation of the astronomical map at the time of your birth. It shows where one could have identified the planets and stars through observation of the night sky. For example, your Western tropical chart may indicate that you are “Libra rising,” but your Vedic chart may show Virgo rising, meaning that if you were born at night and had looked out on the eastern horizon at the time of your birth, you could have actually identified the constellation Virgo rising in the sky.

These are the dates that the Sun aligns with the 30° segments of the sidereal zodiac, which is closely aligned with the measurable/observable astronomical alignment of the Sun and these constellations in the sky (save for the varying breadth of the constellations, see end of article):

Dates may vary by a day or two from year to year. You can also see that I have listed the signs with overlapping dates. That is because the Sun does not pass the imaginary 0° mark of a sign at exactly midnight each month. If you were born on one of these cusp days, you would want to review your Vedic astrological chart to see which sign the Sun was technically transiting during your birth. You will also want to discuss with your astrologer what it means for you to have your Sun so closely on the cusp of two signs.

It is also very important to note that in a Vedic astrology natal chart reading, most Vedic astrologers would not identify you as a “[your Vedic Sun sign, above].” Rather, we generally look at your Vedic rising sign, the constellation that was coming up on the eastern horizon at your birth time, as your most prominent energy. This is the one that most influences your personality, physical body, and everyday experience. The rising sign changes every couple of hours each day, so this helps us to get much more specific about your individual makeup, rather than grouping everyone born during the same month of the year together. The rising sign also determines where all twelve houses in your chart align with the twelve major constellations, telling us more about your style in each area of life. Of course, understanding the placement of all the planets in the birth chart will give us the best understanding of your make-up, as there are many factors that can add a lot of influence to your life.

Another notable point that you can see in the screenshot above, is that some of the constellations take up far more space in the sky than others (see Aries vs. Pisces, above). The twelve major zodiacal constellations are the ones in the same band of the sky where we see the Sun and Moon rise and set each day, called the ecliptic. (Each of these major constellations also rises and sets each day). Hence, the “circle” of the ecliptic is mathematically divided into 360°. At some point, there were designated twelve equal 30° sections for ease of identification, each attributed to one of the twelve major signs, even though the constellations themselves do not take up equal portions of the sky or of the ecliptic. 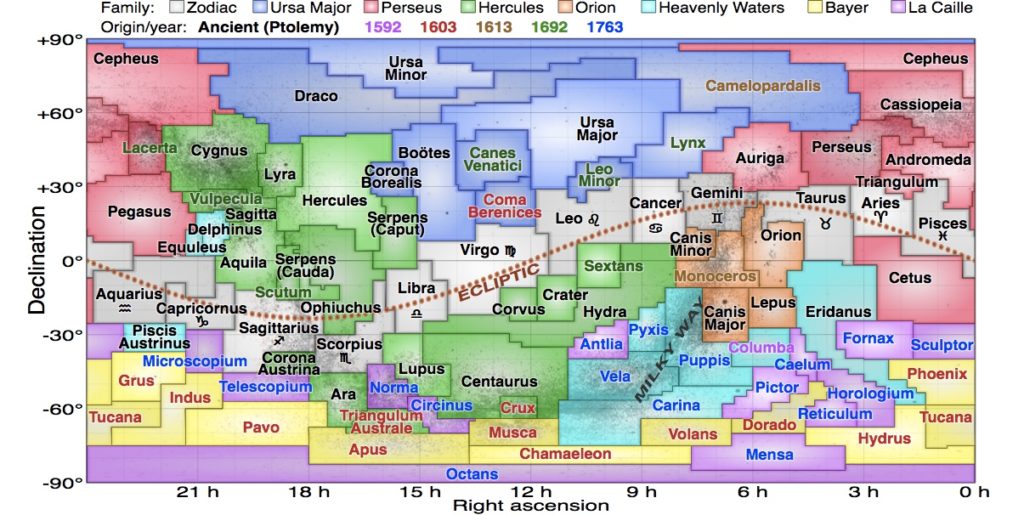 Get to know both your Vedic and Western charts to see the differences, and what resonates more for you. Usually both do to some degree, but many people breathe a sigh of relief when they finally learn about their Vedic chart, because it often makes a lot more sense, resonates on a deeper level, and reveals more about their being. Above all, don’t just take the word of any astrologer, but go out in the night sky and observe the stars and planets for yourself! Feel into them and begin to interpret your own astrology, because astrology is inherently an observation of astronomy, and how the movement of the stars and planets affects us, physically, energetically, emotionally, and spiritually.

I hope that helps! Thank you for your interest. I love educating people about the two different zodiacs and the wisdom of Vedic astrology … I would love to work with you through a personal Vedic astrology chart reading to share insights on your sidereal natal chart, and what it illuminates about your personality, karma, and life course.

I have tried to simplify this topic to give readers a basic understanding of the difference between these two zodiacs and astrological perspectives. One can go into much deeper research about the origins and subtleties of these and their use/preference by astrologers (there is much debate on the topic, and I am a perpetual student myself). Here are a few articles from colleagues and public sources that begin to dive deeper into this topic. Please feel free to send me other links you think would be useful here: