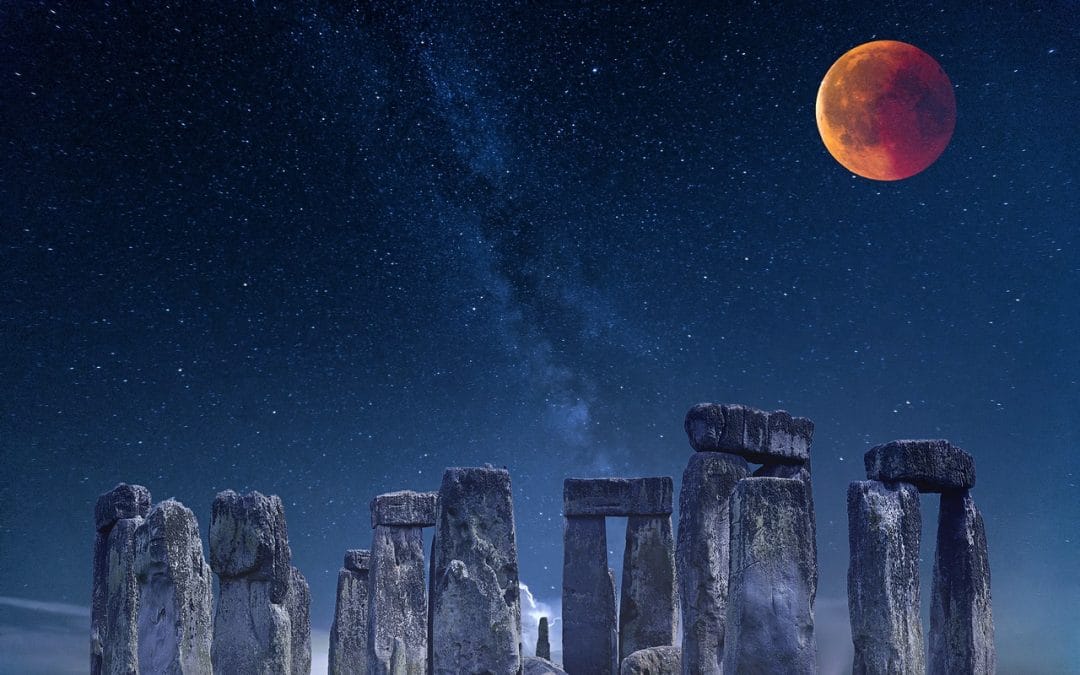 This Sunday night brings a full Moon lunar eclipse in Cancer. This eclipse will be visible from all of north and south America, and at least partially visible from Africa, Europe, and the Middle East. The shadow will create a red hue over the Moon, hence “blood Moon.” The Full Moon peaks at 9:16 pm PST on January 20th, while the maximum eclipse is at 9:12 (with the full eclipse from 8:42 until 9:43 pm). The partial eclipse begins at 7:33 pm and ends at 11:48, west coast time.

This is the last of a series of eclipses with the nodes, Rahu in Ketu, in sidereal Cancer & Capricorn respectively, beginning with the total solar eclipse over North America on August 21, 2017. That eclipse was a transitional one, occurring just as the nodes were moving from the Leo-Aquarius axis onto the Cancer-Capricorn one.

With Rahu in Cancer and Ketu in Capricorn, we have collectively been exploring the dichotomy between emotionality and practicality. Cancer is the sign of the heart, the mother, the divine feminine, and the flow of emotional and literal waters. Capricorn, on the other side, is a sign of practicality, where we stand grounded in earthly responsibility. Throughout this transit we have been called to examine how to balance these two poles, considering when to let the heart run free and follow the flow of our feelings, and when to stay committed to difficult work that may sometimes feel overly structured.

In some areas of life we have seen where we needed more commitment, more structure, and to develop a certain amount of detachment from the emotions, which may have felt exaggerated, intense, or irrational at times during this transit (especially near other eclipses). In other areas, or for other folks, we have observed a need to open the heart more, and let loose on the reins of practicality while allowing the senses guide us more. Overall, it is about learning to blend and harmonize these two seemingly opposites, weaving the right amount of humanity with the work that it takes to be human.

The particular effect of this transit and of these eclipses is (and has been) felt specifically in the areas of life indicated by the houses in your individual chart that fall across Cancer and Capricorn. (Last chance to grab your Free Rahu-Ketu in Cancer-Capricorn Forecast, downloadable bonus for joining my free email list!) Whether it was work vs. home (Aries & Libra), self vs. other (Cancer & Capricorn), or another dichotomy, the nodal transit and eclipses here showed us our blind spots in a particular area of life, and encouraged us to clear out the cobwebs to create more harmony and clarity.

Though eclipses can be revelatory with proper discipline, practice, and self-inquiry, on a mundane level they often throw us off-balance and disrupt the area of life being affected (Cancer and its associated house in your chart this weekend). When the Moon is full the emotions are strong, the mind is active, and the heart is alive, but during the lunar eclipse the shadow energy of Rahu will obscure some of our mental and emotional focus. We can feel confused about the emotions that are arising, or may even lose focus or find it difficult to access the heart. You may feel like you’re “not yourself” during the eclipse.

It’s best to be patient, grounded, and do some type of spiritual practice during and around the eclipse window. If unusual sensations do arise, take mental note or even write them down, and be sure to reflect further on what was revealed after the eclipse has passed. In Indian tradition, it is advised to stay indoors and not eat or drink during an eclipse, so as not to absorb negative energy from the atmosphere.

The Full Moon aligns with Pushya nakshatra, “the nourisher,” within Cancer. Represented by a cow’s udder, this part of the sky brings the potential to nourish others as well as to nourish ourselves from within. With the eclipse here, beware of a sensation of mal-nourishment or loss of vitality, especially if you have your Moon or another planet here. The deity Brihaspati (a form of Jupiter) rules here, as well as the planet Saturn, so consider making offerings to them on this eclipse. 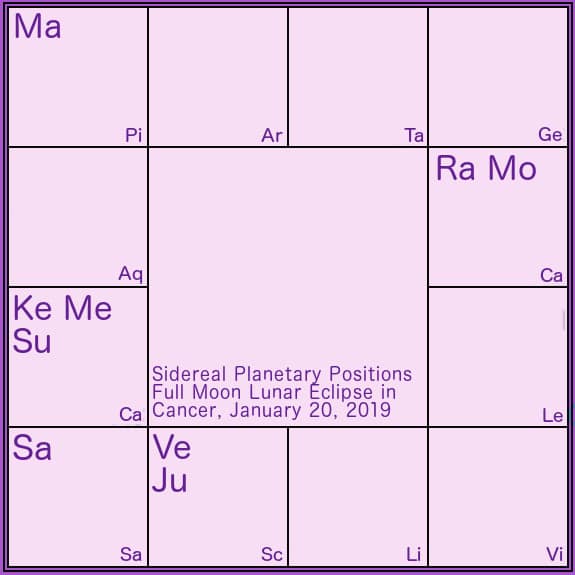 Just hours after the eclipse, Venus will come within one degree of Jupiter, causing a planetary war (graha yuddha) that will last until the 23rd of January. The two planets will be visible in close conjunction in sidereal Scorpio in the early morning, so close that they are understood to be competing for our energy and attention. The things ruled by both planets can suffer during this time — relationships, pleasures, and happiness for Venus, and our idealism and optimism for Jupiter. In particular, both planets rule two areas of your individual chart, so all four areas may also experience difficulty or seem to conflict with each other during the war.

On the 21st, Mercury and Ketu will come into exact conjunction in sidereal Capricorn. People who are ruled by Mercury (Vedic ascendants Gemini or Virgo) should take special care this week, especially of the physical body. For the general populous, the south node joining the planet of the intellect can enhance psychic awareness, but disturbances of the psyche are also possible. Mercury will be quite close to Ketu during the eclipse, and these effects could be magnified.

Please join me and my fellow astrologers on January 25th for a 2019 Jyotish Transit Summit Webinar. We will discuss all of the major planetary transits for 2019. The webinar is free, and you can register through this link.