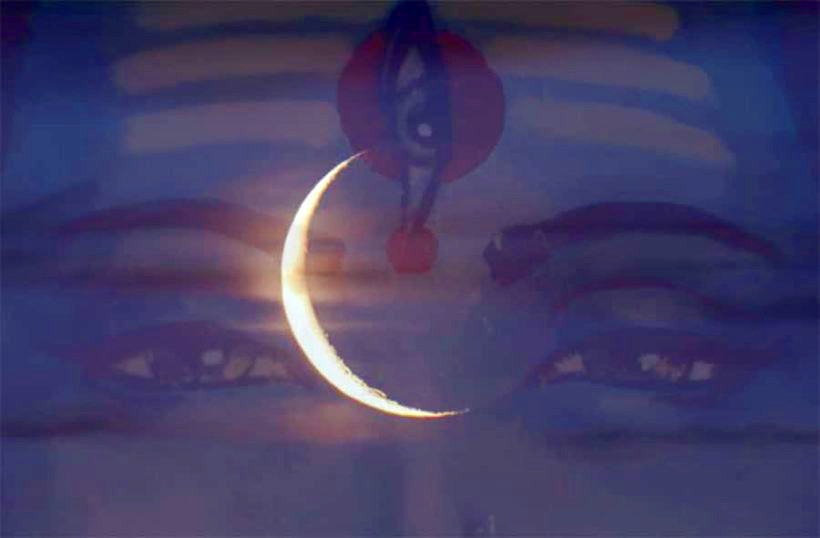 The Moon wanes in sidereal Aquarius on the dark night of March 5th, approaching the exact Sun-Moon alignment for a New Moon at 8:04 am on Wednesday, March 6th, beginning a new lunar cycle. Leading up to this will be Maha Shivaratri, “the great night of Lord Shiva,” on March 4th. This is an auspicious night for prayer and penance, and the benefits of sadhana are multiplied by the Moon’s position and the collective vibration.

Monday night, March 4th, the night prior to the Dark Moon night, is the fourteenth waning phase of the lunar cycle. During this month this night is celebrated as Maha Shivaratri. This is perhaps the most auspicious night of the year for doing sadhana (spiritual practice). It is traditional on this night to stay up all night fasting, chanting, praying, and meditating. This holiday honors Lord Shiva, the great ascetic, and we can recall two stories of great sacrifices that he made protect the entire creation.

One of these is the story of the churning of the milk ocean, which the gods and demons were doing in order to release the nectar of immortality. Before the nectar came up, however, a poison came up first. (This is similar to when we do spiritual practice and begin our path of self-inquiry, and negative tendencies often come to light first, which can be a painful experience. Similarly, during a physical fast or cleanse, toxins can be shaken loose and released first, causing a healing crisis before we continue healing into a freer, happier state of being.) When the poison came up from the milk ocean, Lord Shiva consumed it so that it would not engulf humanity, as a great and noble sacrifice. His wife, Parvati, however, held his throat so that he could not ingest it, thus saving him from being harmed by the poison.

Maha Shivaratri also commemorates the wedding of Shiva and Parvati, which also stemmed from great sacrifice made for the benefit of all humanity. It was said that after his first wife, Sati, perished, Shiva was fully devoted only to his sadhana, meditating for aeons in isolation and renouncing the world. Then the demon Tarakasura began running amock on earth, threatening all of humanity. Brahma foretold that only Shiva’s child could defeat Tarakasura, so the gods devised a plan for Sati to reincarnate as Parvati, and win over her Lord to marriage once again. He was not easily swayed, however, and it was only after Parvati became an ascetic and underwent great penance that he agreed to marry. They eventually produced their son Kartikkeya, who went on to slay the demon.

Thus, this holiday is celebrated through the penance of fasting, forgoing food, water, and sleep, for one night, and simultaneously celebrating the union of Lord Shiva and Parvati, or the masculine and feminine energies of creation, that allows this dance of life to continue. It is an apt time to feel the forces of Aquarius upon us, which compel us to consider our role in society, and in the universe, and what personal sacrifices we can make for the greater good. Even if you’re not able to stay up the whole night, any amount of devotional practice, serviceful sacrifice, or chanting of Om Namah Shivaya on this night can have beneficial affects that are magnified greater than on any other night. 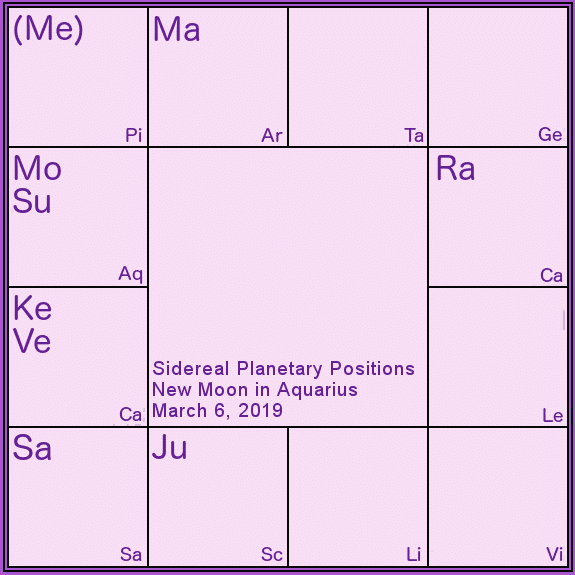 The Sun and Moon meet in sidereal Aquarius to begin this lunar cycle. Aquarius is known as Kumbha in Sanskrit, a word for “pitcher” or “vessel.” According to the Vedic texts, the sign Kumbha can be imagined as a man holding a pot, with deep-brown skin, standing in the water. We can see this Aquarian imagery in the sadhus of India (and its biggest ritual pilgrimage day, the Kumbha Mela), who make their lives an offering of service to society through their prayers and Saturnian austerities, while renouncing the individual self. In the Aquarius cycle, we think about how we can serve the whole.

Saturn both rules Aquarius and is aspecting the Sun and Moon here (from sidereal Sagittarius) at the time of this New Moon. Saturn brings to us awareness of the long term and the bigger picture, and through this masculine or active sign, compels us to make commitments and offerings to something greater than ourselves and our momentary happiness. This is a great month to consider a new way that you may be of service to your community or to society.

The New Moon cycle begins with the Sun and Moon in the Vedic nakshatra called Purva Bhadrapada, the former “lucky footed one.” This nakshatra bridges Aquarius and Pisces and is often represented by a funeral cot, symbolizing the transition from life into death, or ultimate liberation. It is ruled by Aja Epakada, the one-footed goat who is often associated with the image of Lord Shiva as Nataraj dancing on one foot, a fitting image for Maha Shivaratri. 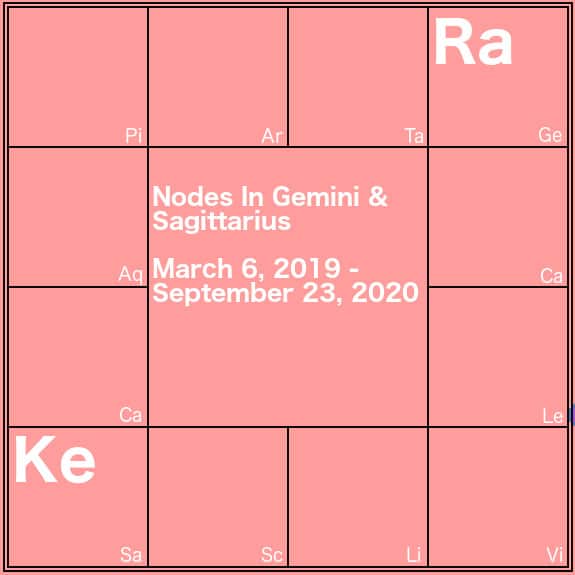 With a mean node calculation, Rahu and Ketu will transit into Gemini-Sagittarius on March 6th. (Under a true node calculation, they will not change signs until March 23rd; See Technicalities: Mean vs. True Node section below if you want a little more info about nodal calculations.) Regardless of the calculation used, March is a month of transition for the nodal energy. With the nodes in Cancer-Capricorn for the last year-and-a-half, we collectively felt a dichotomy between listening to the heart and following our emotions, against doing what is practical and responsible in an earthly way. It was a chance to balance these two things as well, learning to create a harmony between the practical and the emotional.

Throughout the coming transit of Rahu and Ketu through Gemini and Sagittarius, we will be feeling a polarization between curiosity, fact-finding and learning in an intellectual way, versus taking actions based on our principles and beliefs. Sometimes the intellectual mind does not agree with our fiery passions. This transit will be a time to learn to balance the two. With opinionated Sagittarius on one side, and communicative yet flexible Gemini on the other side, we may learn new ways to communicate and interact with those who oppose us in ideas, stepping into another’s shoes while still maintaining and honoring our personal beliefs and philosophy.

For each natal rising sign, this coming transit will affect a particular axis of learning in your life. You will be more able to see and work with some of your blind spots in these areas throughout the coming year-and-a-half long nodal transit. These things will especially surface around the bi-annual pairs of eclipses (coming this year in July and December).

Mercury stations and begins apparent retrograde motion on March 5th, the day before the New Moon. He is also currently debilitated in sidereal Pisces, so this time period could have us a bit mixed up around some details, and possibly challenged with communication and accuracy. He’ll retrograde back into Aquarius on March 14th, before returning to direct motion on the 28th.

Also during the first half of this lunar cycle, Jupiter will enter the last 48 minutes of sidereal Scorpio (one muhurta), on March 15th. This region of the sky, called gandanta or a “knot,” is considered one of the most difficult places in the zodiac. It spans for one muhurta before and after the 0° point between sidereal Scorpio and Sagittarius, as well as those regions on the cusp of Cancer-Leo and Pisces-Aries (however, this gandanta location is often considered the most difficult. (Some astrologers may consider it spanning up to one or even two or three degrees to either side of the cusps.)

Normally, a planet transits through this zone rather quickly. Jupiter is currently slowing down, however, and will come to a stationary halt at 0°14’ of sidereal Sagittarius on April 10th, before beginning retrograde motion and passing back into Scorpio. He will threrefore be traveling the gandanta zone all the way from March 15th until May 6th (or longer if the zone is interpreted as wider).

Though Jupiter will be dipping into his own sign from March 15th through April 22nd, the fact that he will remain in gandanta at this time will not bring the added strength that we would expect from a sva graha. Those who are ruled by Jupiter may feel a bit “stuck” in various ways throughout this transit. It is important to be patient and keep up with sadhana during this time. Additionally, he will be joined by both Saturn and Ketu during his time in Sagittarius, both of which can be challenging companions.

Rahu and Ketu have been transiting through the Cancer-Capricorn axis for nearly 18 months, and are getting ready to make their transition into the Gemini-Sagittarius axis, for the next 18. The date of this transition will vary whether you are using the “mean node” calculation or the “true node” calculation. To simplify this as much as possible, we must realize that the nodes do not have planetary bodies that can be observed as the other grahas can be. (The grahas are “the forces that grab us,” including the Sun, Moon, Mars, Mercury, Jupiter, Venus, Saturn, Rahu and Ketu.) 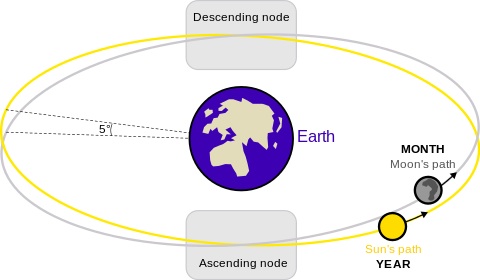 The nodes, astronomically are the places where the Sun’s and Moon’s paths intersect. The ecliptic is the apparent paths that the Sun travels “around” the Earth. The Moon’s orbits is not completely flat or parallel with the Sun’s, but slightly inclined, so that it passes this line and is sometimes to the north of it, sometimes to the south. We can measure astronomically and by observation when these crossings happen. To get the mean node, we take an average distance between these two points based on how many days it takes the Moon to get from one to the other. The true node is calculated using a method that also accounts for the slight wobble of the earth and the Moon’s orbit around it.

Some astrologers favor using the “mean” node calculation while others prefer the “true.” These two calculations of the node will sometimes put them about one degree apart, which is noticeable in cases where, in a natal chart, someone’s node is on the cusp of two signs (it may be in one sign using mean node and another sign using true node). It also affects the date of transition between signs that we observe when talking about nodal transits. In both cases, it is best to observe for yourself (use a lot of charts for case studies) and see which makes the most sense to you. I prefer using mean node calculation.

Personal Readings are available to help you understand your individual natal chart and how these transits will affect your upcoming year.