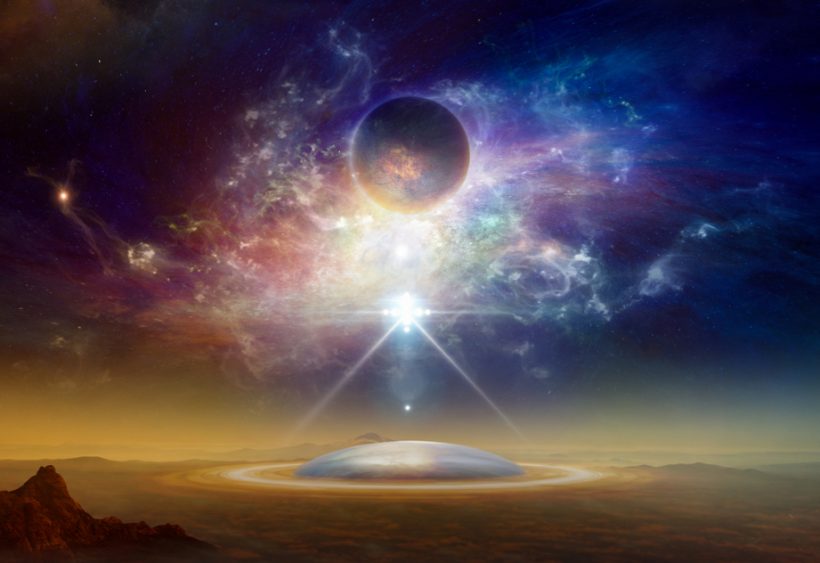 The full Moon will be illuminated in sidereal Capricorn on August 14th, reaching totality at 5:29 am PDT on the 15th. Opposite the Sun in watery Cancer, this full Moon ties in a grounded Saturn energy, bringing us back to earth for a moment in what may be a highly emotional month. The fire energy has also been riding high these current weeks, with Venus highly combust next to the Sun, and Mars now moving through Leo. This full Moon occurs under Dhanishtha nakshatra, the star of wealth.

We began this lunar cycle with Sun and Moon in Cancer, aligning our minds and spirit with the cooling waters of the heart. As the Moon becomes illuminated in Capricorn, it’s in an earth sign and under the rulership of Saturn, who reminds us that there’s more to life than the waves of the emotions. Moon in Capricorn helps us to remember what’s most important, to slow down and steady ourselves, and to commit to a path of action that aligns with our long-term goals. It’s a time for creating structure and embracing stability, stabilizing the fickle mind that can change at a moment’s notice when guided by water alone.

The Full Moon aligns with the Vedic nakshatra called Dhanishta, “the wealthiest.” Dhana means wealth, and this implies prosperity of both a material and spiritual nature. Bridging sidereal Capricorn and Aquarius, Dhanishtha can bring wealth, innovation and success. It is also known as a musical star, symbolized by a musical drum, showing that it is a place where we can really attune to the cosmic rhythm. It is ruled by the eight Vasus, the elemental gods of nature. 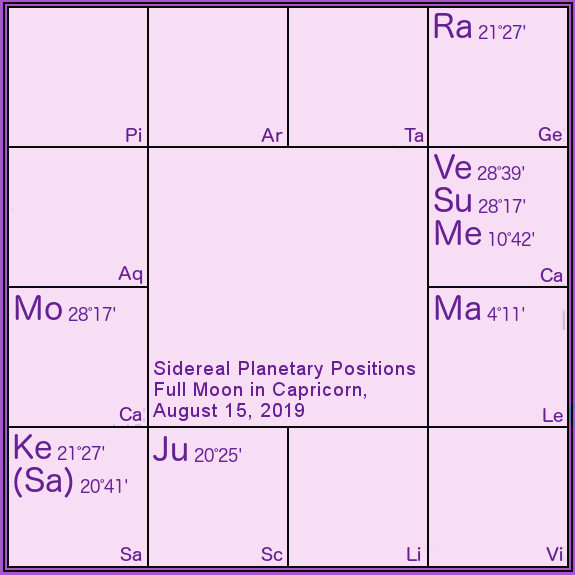 After four months in retrograde motion, Jupiter stationed in sidereal Scorpio on August 11th, and is very slowly beginning his journey forward through the zodiac again in direct motion. Jupiter direct may help you to begin moving forward again in the Jupiter-ruled areas of your chart and life, which have been under heavy contemplation or re-consideration for several months. Collectively, Jupiter’s direct motion will show us more conformity of ideas and beliefs. For example, with Jupiter retrograde this year we have seen a lot of nuanced political platforms coming forward from a huge array of candidates, and as he moves forward we will see fewer of those as people solidify their support around certain “big” ideas.

Venus has been traveling very close to the Sun this month, within 3 degrees since August 2nd. When this happens, he is so close to the Sun that his brightness is no longer apparent to us. Venus has not been visible to most of us since mid-July, and will not be seen again til late September, which makes it challenging to harness the blessings of Venus—happiness, pleasure, and inter-personal harmony. He is traveling close to the Sun and will actually pass directly behind the Sun, from our perspective on earth, on August 14th, for an exact conjunction then. He will stay within three degrees, in high combustion, until August 25th, though he will not reappear for another month after that. Both Venus and the Sun move into Leo on the 16th, adding more strength to the Sun and more fiery independence to the side of us that is meant to compromise.

Mars is also currently in Leo, since August 8th, adding fire to fire and increasing our courage and will significantly, after the month of debilitation while Mars traveled through Cancer. Mars-ruled folks may notice some of the oomph coming back, and a little less emotional heaviness. Mars will soon face some other challenges, however, as he simultaneously comes into combustion as well as a planetary war with Venus. Mars and Venus go to war August 22nd-26th, with both highly combust within 3 degrees of the Sun. This can present challenges in Mars- and Venus- ruled areas of your life, and with managing both our will and our desires appropriately. Mars will become fully combust (aligning exactly with the Sun) on September 2nd.

We’re in the time of year where all planets are on one side of the nodal axis (between or joined Rahu and Ketu), save for the Moon who travels from one side to the other for half of each month. Kala Sarpa can exacerbate challenges for those who have a prominent nodal placement in the natal chart, or are running a dasha of Rahu or Ketu currently. This cycle begins on August 25th and runs through September 9th. Sadhana is the best remedy for nodal challenges.

Personal readings are available and will help to explain how all of these alignments affect your chart and life in particular.