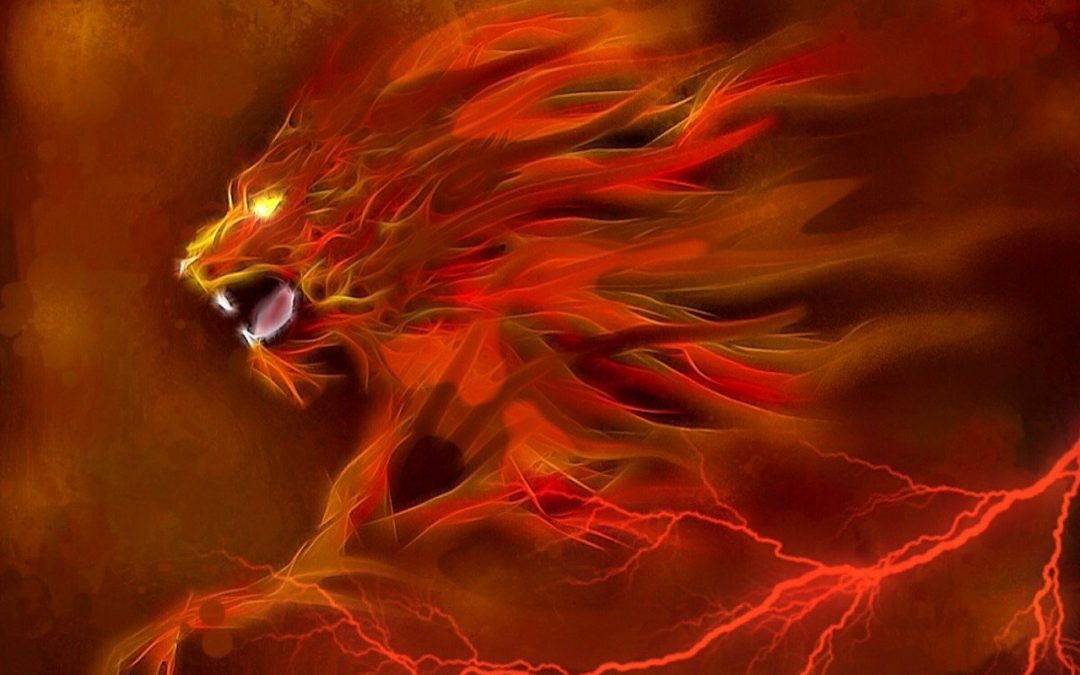 Tonight’s Dark Moon brings the Sun and Moon together in early sidereal Leo, at 7:42 pm PDT, close to Mercury, initiating a cycle of solar power where we are driven by the solar energy within as well as externally. This New Moon occurs within the Vedic sign of Magha, “the mighty,” bringing forth a regal energy that empowers us and begs the question of how to use our privilege and strength most effectively. Mars is also strengthening now, as he moves into his own sign of Aries for the next several months.

Leo is the sign ruled by the Sun, the literal source of power for all of us living in this solar system. The Leo cycle can help us to feel strong and inspired as we connect to source energy. When you’re feeling “in your power,” what do you then do with that energy? It’s a good time to check in with that especially as the northern summer draws towards an end. Take advantage of the light and all that you can do with the freedom that the long days offer. September 21st will bring the equinox wherein the days become shorter than the nights and the period of darkness rapidly descends.

Within Leo, Sun and Moon join to begin this lunar cycle in the Vedic nakshatra of Magha, “the mighty.” Symbolized by a throne, this star-sign brings forth a regal energy, gesturing towards achievement, status, and responsibility as well as privilege. It can be identified by the bright star Regulus within the constellation of Leo. Its deities are the Pitris, the ancestors of humanity, and indicates an important time to connect with our own ancestors and lineage. Ancestral karma could be at play in your life more than you realize, and this is a good time to pay attention to what is yours and what may be inherited.

Mars has also moved into his home sign of Aries now, and will transit here with great strength through October 3rd, when his retrograde journey (September 9th through November 13th) takes him back into Pisces again, before returning to Aries December 23rd through February 21st. With both fire planets, Mars and Sun, strong and in their home signs, we have the opportunity now to really harness and direct our creative energy. Be aware also, however, that your pitta could also be aggravated during this time, sending passions and irritability on a dangerous rampage if you are not using that fire for personal purification and strengthening. If you notice your pitta is getting out of hand, be sure to take in cooling activities, breaths, and foods…and avoid your hot yoga for a while.

Since the two fire planets gained strength by entering their own signs on August 16th, we have seen extreme heat waves and deadly wildfires sweeping the West. Watch out for these continuing through at least mid-September while the two are both strong. 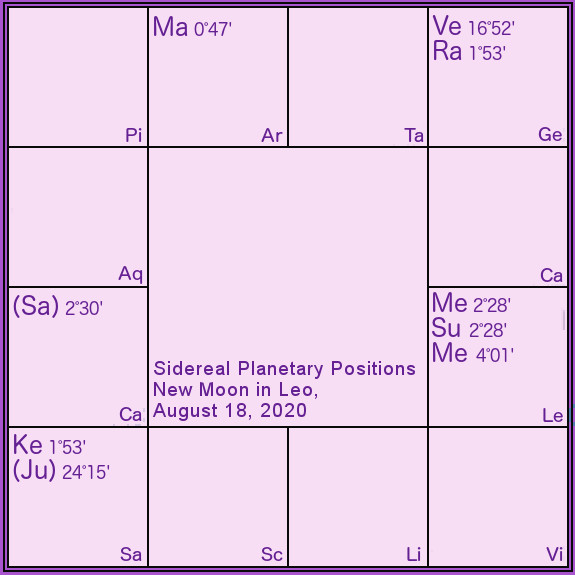 A Month for Social Movements

Both Mars and Sun are aspected by a strong and bright retrograde Jupiter, also in his own sign, which could augment their firepower. This aspect could also offer inspiration towards our actions this month, helping them to align with our belief systems. The strong and bright retrograde Saturn, also in his own sign, adds to  these four to create a powerful royal yoga that will create many auspicious muhurta (times for taking specific actions) throughout the day.

With Mars and Aries on the ascendant (as it will be in the Eastern U.S. at this New Moon time, and in other locations throughout the day for the coming month), We find the first, fifth, 9th, 10th, 11th, and 12th lords all in their own sign. The houses of dharma as well as the houses relating to society and higher purpose are all strong from their lords’ sva nature at this time. With the interplay of Jupiter’s aspect as mentioned above, this could contribute to a lot of ideologically-motivated actions on both personal and societal levels. Remember that Saturn’s influence can be stern and discerning, however, so we will have to acknowledge and incorporate the responsibility and hard work that comes with the passionate actions that spring from our belief systems.

The celebration of Lord Ganesha, who is known as both the creator and destroyer of obstacles, is this Friday/Saturday depending on your location. May he clear the way to a more peaceful and harmonious planetary experience

To see how these transits affect and interplay with your chart and karma, you can request a personal reading here.