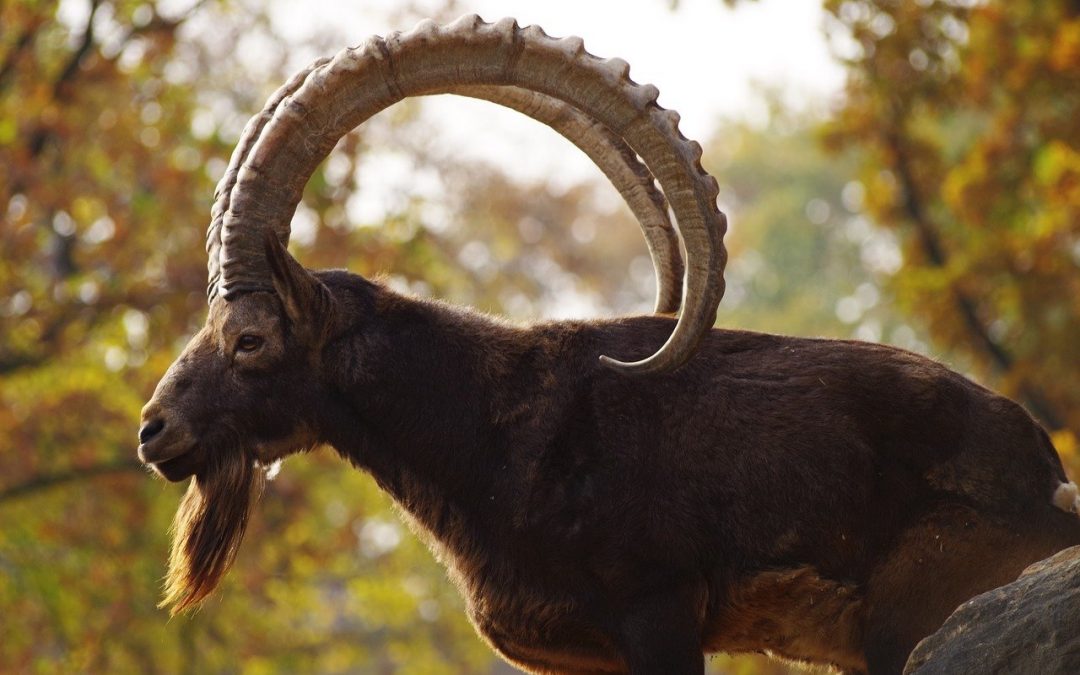 We have another Dark Moon tonight under which the Sun and Moon align at the very end of one sign (Sagittarius), setting the tone for a month that blends and bridges the energy of two signs as the Sun spends most of this cycle in sidereal Capricorn. The exact New Moon moment is at midnight Eastern time on January 13th (between January 12th and 13th), with the Sun and Moon coming together at 29 degrees and 6 minutes of sidereal Sagittarius. The last lunar cycle began in December with a solar eclipse as the Sun and Moon joined in the very end of sidereal Scorpio.

With the New Moon moment happening in Sagittarius, hours before both Sun and Moon transit into Capricorn, the coming month will carry the energy of both signs. Sagittarius is a fire sign ruled by Jupiter, inspiring us to act on our beliefs and put these into the world through righteous action, standing up for what we believe in and aligning our actions with our vision.

This lunar cycle frees us from the energy of the eclipses of this cycle. When Sun moves into Capricorn, however, we will continue to feel the pressure of Saturn that has been strong over the last year while he has been transiting his own sign. Sun, Jupiter and Saturn will all be joined in Capricorn over the next month (with Mercury and Venus both spending much of it there as well). As Jupiter and Saturn become combust (they are now so close to the Sun as to be barely visible), they may lose some power… The sense of restriction that we feel could be alleviated this month, but our ability to be steadfast and endure difficulties is also weakened, as well as our sense of inspiration with Jupiter going out of sight.

Capricorn energy is about finding stability and the inner strength to work hard for our responsibilities and the structures that sustain us. A feminine earth sign, we can look towards our internal resources this month and make sure we are using our energy for what is most important. 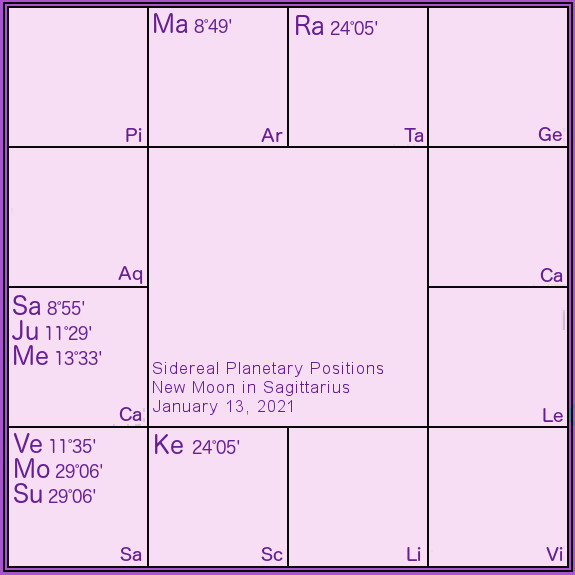 The solar eclipse of the last cycle led into a full Moon in Ardra nakshatra, a star that often brings violence and turbulence forward, especially when associating with the nodes or an eclipse. The violence at the US Capitol during the waning part of the last cycle could be associated with the tone under which the cycle began (dark eclipse energy in transformative Scorpio), combined with the subsequent full Moon in Ardra, still afflicted by the energy of the eclipse.

As the natural 10th sign, Capricorn in the world chart directly relates to government. With four planets here in the coming days (Juipter, Saturn, Sun, and Mercury), there is a lot of pressure (Saturn) on now to create a government, structures, and leaders that will sustain the world, be inspiring, and purify the energy of authority. This bodes well for the US presidential transition in general. On January 20th Moon will be in Ashwini, the first nakshatra, a good placement for transitions.

He will, however, be joining Mars, who is the brightest planet in the sky over the next few weeks. With Mars bright and Saturn and Jupiter nearly out of sight, there is definitely potential for more violence to come (especially having the Moon joined Mars on January 20th itself). Saturn becomes highly combust that day as he goes within 3 degrees of the Sun, which cripples authority structures a bit, as well as our ability to use restraint. Hopefully the powerful energy of the Sun itself in the 10th house of this day’s world chart (and Moon chart) is enough to bring a sattvic purifying energy to the realm of government, with help from Jupiter who is neecha bangha and slightly brighter than Saturn.

The day the Sun goes into Capricorn (January 13th/14th) begins the Hindu solar month of Makara. There is a Hindu celebration in India in honor of “the return of the light,” as we begin the first month after the winter solstice. This is an auspicious time for new beginnings and calling blessings into our lives.