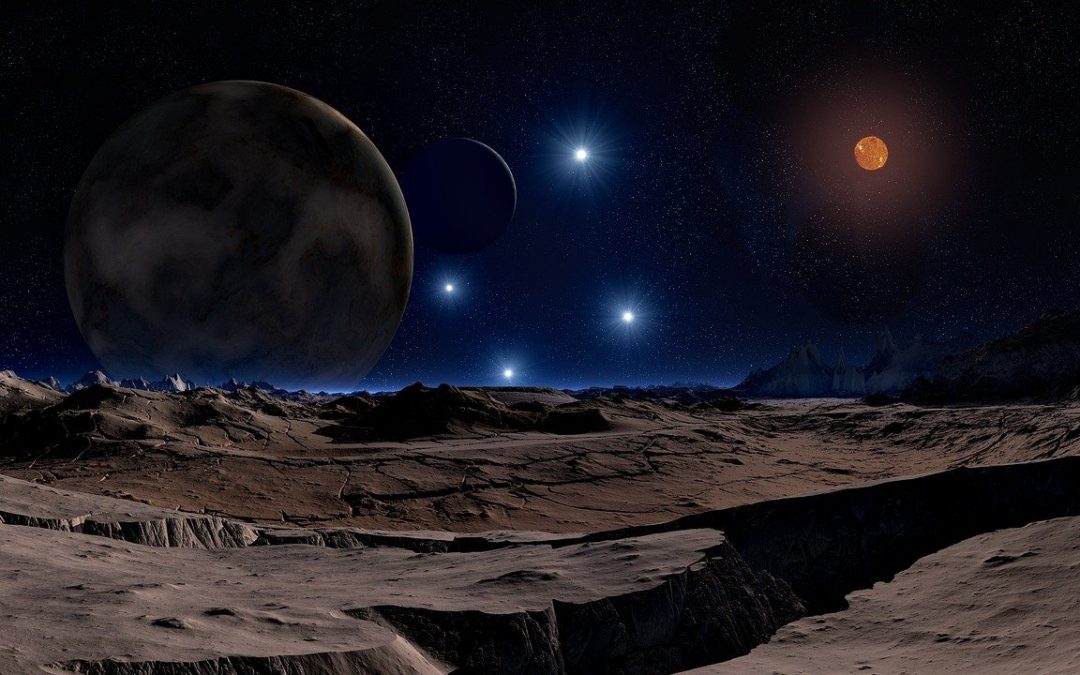 Today the Sun and Moon join at the very end of sidereal Capricorn for a New Moon at 2:06 pm EST. By tomorrow both Sun and Moon will move into sidereal Aquarius, where the Sun will transit for most of this cycle. Both signs are ruled by Saturn, who is joining Sun and Moon in Capricorn as we begin this cycle. Jupiter, Venus, and retrograde Mercury are also there, bringing us a heavy dose of Capricorn energy in a very weighted chart, with all these planets between the two nodes who create a Kaala Sarpa yoga.

Saturn has been in his own sign of Capricorn since January of 2020. This earth-sign is about being responsible, focusing on structure, family, and commitments. With Saturn here for the last year he has been strong in his own sign, putting the pressure on us to work hard for what is most important, and spend less time on the frivolous. Saturn pressures us to be mature but his heavy influence can feel like a restrictive weight. As we begin another cycle under strong Saturn’s influence, we may feel like life is a bit serious and difficult right now. 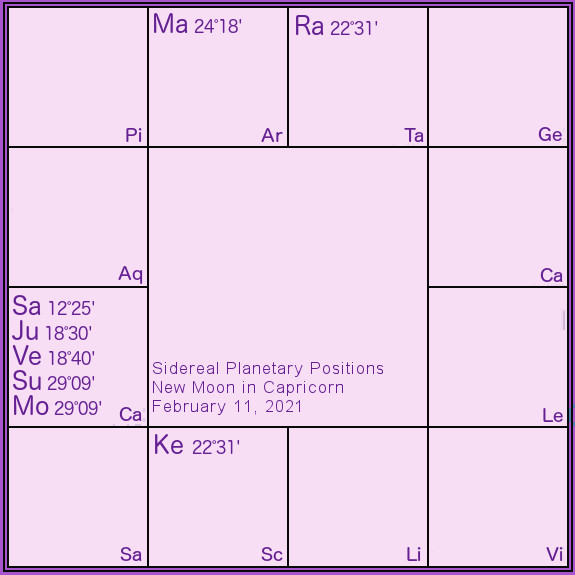 At the moment of this new Moon we have 6 of the 9 grahas in sidereal Capricorn, with Sun and Moon in Dhanishtha nakshatra and Saturn, Jupiter, Venus, and retrograde Mercury all in Sravana nakshatra.

Dhanishtha is the star of wealth (dhana), and thus it does give us the opportunity to start this month with a mindset of prosperity. It is symbolized by the musical drum, showing that we must keep a steady beat, finding the rhythm that is right for us, in order to succeed. Symbolized by the female lion, we can be brave and fierce while also meeting the basic responsibilities of providing for our families. The deities who rule Dhanishtha are the eight Vasus, the elemental deities. This can be a good time to connect with these principles through the study of Ayurveda, especially examining how the elements are at play within each of us.

With four planets in Sravana nakshatra, the universe is asking us to “Listen!” The star of hearing, and symbolized by an ear, Sravana is where we can listen deeply to the lessons that are being taught by the cosmos. As with any New Moon, this is an opportune time of month to be more inward, tuning into the voice of the heart instead of the chatter of the mind and the external world. Lord Vishnu, the preserver of the universe, presides here, further encouraging us to maintain that which is around us as we seek inner wisdom.

With so many planets in both of these nakshatras this lunar cycle could be a good time to begin projects that require long-term commitment and hard work. Take note, however, of the planetary war going on between Jupiter and Venus…

Jupiter and Venus war when they come within 1 degree of each other in the sky, which they will be until 9:31 am EST on February 12th. Neither planet is incredibly strong and luminous already because of their proximity to the Sun — they rise and set during the daylight hours so are not currently visible. Jupiter is debilitated in Capricorn (though neecha bhangha, somewhat helped due to ruler Saturn’s presence there). Therefore beginning any ventures ruled by these two would be less than ideal during the planetary war, and best to wait until after that time has passed. That would include ventures in the arts, music, love, children, education, learning or teaching.

Venus and Mercury will engage in planetary war from February 12th through 13th, and then Mercury will war with Jupiter from the 13th through 15th. After Mercury stations and ends his retrograde journey on the 20th, he will pass by Jupiter again for another war from March 2nd through the 6th.

With all planets clustered together right now (except for lone Mars, who transits his own sign of Aries), the nodes Rahu and Ketu cut the chart sharply in half with no planets on the other side of their axis. This creates the somewhat dreaded Kaala Sarpa yoga — the “black snake” or “serpent of time.” This adds a weight to the chart that compels all of us to dive deeper into sadhana in order to work with the energies at hand. A lot of what is going on may be subconscious or karmic, and requires looking at the aspects of our lives that are difficult to see or understand. The kaala sarpa energy will pervade until Mars enters Gemini on April 14th.