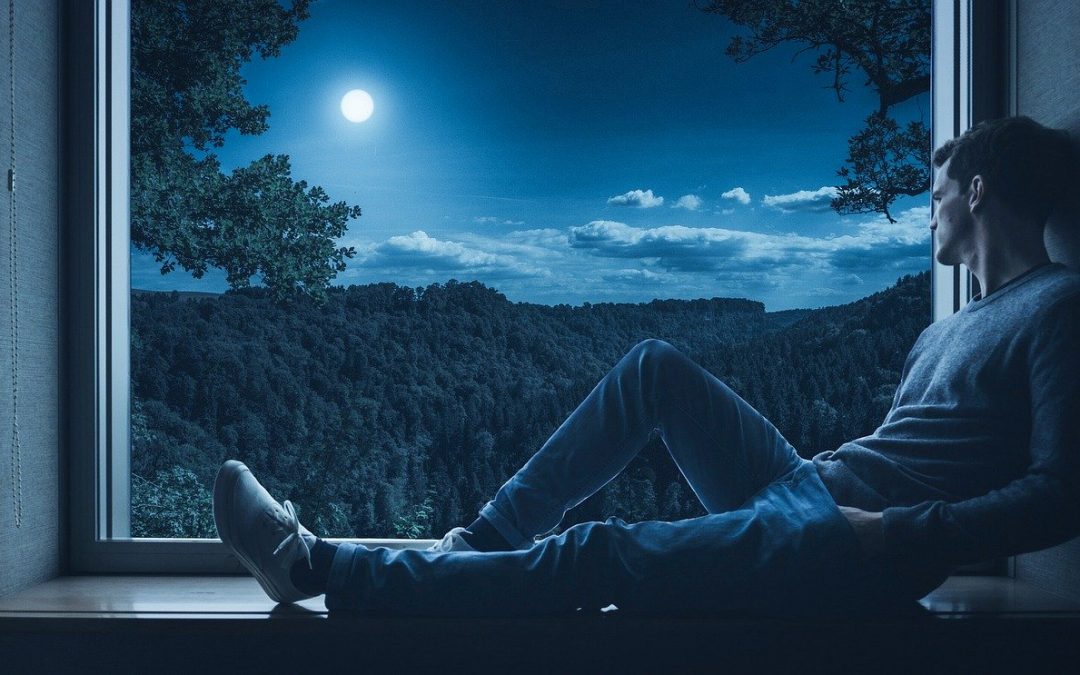 The full Moon will rise as the sun sets on April 7th, reaching its maximum brightness at 7:35 pm PDT. Moonrise varies depending upon your location, but in San Francisco the Moon will rise at 7:28, with the Sun setting at 7:39. This will be a beautiful sight, aligned with sidereal Virgo, which will not be visible until later in the night.

Since I’ve been on mostly on maternity leave since October, I’ve honestly been focusing much more on the little being in front of me than on the planetary positions. I relate with the planets in small, personal ways each day according to the days of the week, and the Moon cycle in general, and I charted the year to see what major movements would be happening. And though I analyze the current planetary positions in relationship to natal charts when I’m doing personal readings, I thus far never got the chance to put together any year-long analysis or predictions.

To be blunt … I honestly didn’t see these current events coming. I wanted to make sure I could at least visit the Covid Crisis in my next newsletter, and with baby life, sheltering-in-place, and an Ayurvedic spring cleanse on my plate a few weeks ago, I decided to skip offering the last new Moon update rather than send it out without taking the time to include this info. So, although I’m sure this situation can withstand much deeper analysis than I can offer during these few hours of sleeping baby (and many more decades of study than I have under my belt), here goes…

Let’s start with Saturn. Saturn takes about 2.5 years to transit each sign, meaning it takes him 30 years to transit around the entire zodiac (this is why “Saturn’s return,” i.e. when he returns to the sign he was in during your birth, happens beginning around 27.5-30 years of age). Saturn is the old wise person of the zodiac, the one who teaches us about the long-term consequences of our actions, and about the hard work and commitment it takes to reach our goals. When he comes around, it feels like he sits on your head, putting the pressure on and bringing an air of stern seriousness. “Time to grow up,” says Saturn.

On January 23rd of this year, he returned to his own sign of Capricorn (sidereal). Earth-sign Capricorn is where he teaches us about responsibility and structure. Where we have not been responsible, or where structures we have created are too weak, he will show us this now that he has come back home to oversee things in these areas. Crumbling infrastructure, therefore, is one possible result of this homecoming.

Capricorn is the natural tenth house, and therefore the tenth house for a chart of the entire world. Tenth house relates to government, commerce, and all the activities going on “out in the world” in the middle of the day. Saturn often brings restriction, and a sense of things drying up, so with his return here, we are seeing immense restriction on all 10th-house matters on a global scale, where we literally cannot go out in the world, and careers and commerce are suffering. The pressure is on governments to step up to the responsibility and create new structures to help us through this time.

Saturn will be transiting through this sign through January, 2023 (minus a couple of months in Aquarius mid-2022). We can expect to see some major restructuring in governments and commerce through this time. It is my hope that we end up with systems and structures that are more sustainable, more responsible for the whole. Capricorn is a feminine earth sign that, like a mother, wants to see all her children supported and sustained.

Also in January of this year, on the 15th, Ketu transited into Mula nakshatra, “the root” star at the beginning of sidereal Sagittarius. (Since Ketu moves backwards, he is counting down the degrees of Sagittarius on his way out and into Scorpio in September). Having been joined with Saturn for much of last year in Sagittarius, the combination stirred the pot in the world stage of ideology, pinning many philosophical groups against one another and causing us to analyze our own beliefs and toss out the parts that do not work. Now that Ketu is in the root of the zodiac (literally aligned with the galactic center), he is asking us to dive even deeper into what we believe in—philosophically, spiritually, politically.

Jupiter is currently the bridge between the two houses of Sagittarius and Capricorn, ruling the former (with Ketu in it), and transiting the latter (with ruler Saturn occupying it). This connects Jupiter, Saturn, and Ketu once again, as the three were joined in Sagittarius during part of the end of the year. Connecting Sagittarius and Capricorn connects the 9th and 10th house matters — the ideology of humanity at large, and the manifestation of it on the world stage (in a personal chart, it connects your higher education with your career, and your personal belief system with your outward actions in the world).

This will contribute what can be seen as a paradigm shift as the outward restructuring happens: ideologies that are old and no longer serving are coming face to face with the structures that can no longer support the world’s population to thrive. It may be my own Jupiterian idealism speaking, but I think we will see the dominant framework of corrupt capitalism usurped by one that cherishes all of humanity and cares for us and the earth herself as well. Now there’s some wonkiness due to Jupiter’s technical debilitation in Capricorn, and I’ll talk more about that a bit later…

Mars in the mix means the warrior energy is there. Mars is currently transiting Capricorn along with Jupiter and Saturn (from March 22nd through May 4th, all 3 are together here). So here’s the deal: Saturn rules Capricorn, and he’s strong here (teaching lessons outlined above, i.e. fix broken structures). Mars is considered exalted in Capricorn, meaning he’s also strong here. It’s where he’s best able to execute his warrior nature under the rulership of “consider-the-consequences” Saturn. Mars finds discipline in this sign, meaning our fiery energy (or that of mother earth) can be channeled toward a specific long-term goal, rather than just exploding out erratically. It can still feel like a war though. (On a personal level, this is a great month to recommit to sadhana, yoga, exercise, or any other practice that requires focus, endurance, and commitment.)

Jupiter is in fact technically debilitated when he’s traveling through Capricorn… This may be what is contributing to what feels like a lack of hope or faith for many people right now. Jupiter gives us these qualities through his expansive nature, but in restrictive, practical Capricorn, optimism is overshadowed by the harsh qualities of what we must endure the real world. He’s dancing with two strong malefics, while debilitated, which is giving the stern hand of Saturn and the fierce sword of Mars seemingly insurmountable power over our inner sense of grace and cheer.

However, because he’s joining both his ruler, Saturn, and an exalted planet, Mars, Jupiter’s debilitation here is also technically doubly neecha bhangha, or heavily modified. That means there’s a chance for the hope and optimism to be uplifted, or for the philosophy to be progressively modified, allowing the positive qualities of all three planets to harmonize. That means our faith could be gradually restored by the courage and strength of Mars and the maturity and endurance of Saturn. It leads me to believe that the situation will not result in the worst-case scenarios that many of us may be imagining right now.

Venus is also strong right now, traveling through his home sign of Taurus (since March 28th). Mother Nature is actually prospering right now, through the lack of air and vehicle travel that is taking place. The skies and lands and waters are actually cleaner than they have been in decades. We are also seeing a lot of person-to-person cooperation all across the globe. There is a sense of friendliness, of neighborliness, of shared humanity during this time of crisis. Venus is spending quite a few months strong this year, as he will turn retrograde on May 12th and remain in Taurus through July 31st. This is a time for kindness, compromise, and caring for nature. I think there will be some reconsideration of our approach to these things during the retrograde period (May 12th through June 24th), and some powerful signs of progress coming out of the tail end of this transit.

Saturn will turn retrograde in Capricorn on May 10th, Venus will turn retrograde in Taurus on May 12th, and Jupiter will turn retrograde, also in Capricorn, on May 14th. This gives strength to all three, and also brings forward a reflective quality around the things that they rule. The structures, the cooperation, and the philosophies by which we live will be under review and revision on a large scale (again, especially due to the positions of Saturn and Jupiter in the 10th and 9th natural houses). Jupiter returns to his own sign of Sagittarius on June 29th, which should feel like a grace-given sigh of relief. Of course, there are still the eclipses to contend with … June 5th, June 21st, and July 4th (more on these in an upcoming newsletter). Things tend to settle down after an eclipse cycle passes, so let’s say that sigh can be completely let out after July 4th. 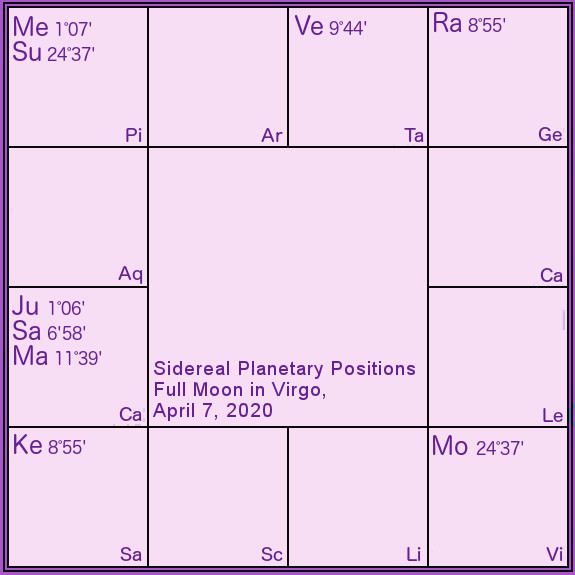 This week, the Moon is coming full in Virgo, the sign of details and control, opposite the Sun who is transiting through Pisces. The Pisces cycle simultaneously makes us feel alone and distant, while also bringing us closer to our faith in and surrender to a higher power. The full Moon in Virgo reminds us of all of the practical and rational things that we need to do, taking care of life’s details, while we are in a mindset of looking for higher answers. Balance is key. Depending on your nature this can be one of the hardest axes to find balance within, whether you tend towards the Jupiterian or Mercurial side of things. As Mercury is currently debilitated in Pisces, we may find it harder to stay focused right now but the full Moon is an opportunity to do so.

This full Moon is in the Vedic nakshatra of Chitra, “the brilliant.” It aligns with Spica in Virgo, one of the brightest shining stars in the sky. It is the sign of the celestial architect, Vishvakarma, so is also very much about structure, or restructure. There is a beauty here, and a love of art and romance. It bridges Virgo and Libra, so the full Moon here encourages us to move from attempts at strict order toward divine balance.

Today’s full Moon also brings Hanuman Jayanti, a celebration of Lord Hanuman, Lord Ram’s greatest devotee. Now more than ever we need to call on his endless well of faith, devotion, humility, and service. This year staying home is the greatest service many of us can do, so let us do it not reluctantly but as an offering to the world and all of humanity.

I promise to continue my analysis of the situation and the rest of this year’s unfolding as time continues and allows. Again, I may be biased, as we all are based on our natal planets, but as your Jupiter-driven friend, I’d say, keep the faith.

May all beings be happy and at peace. 🙏🏼

Readings are back on. Click Here to schedule a personal Vedic astrology reading by phone.