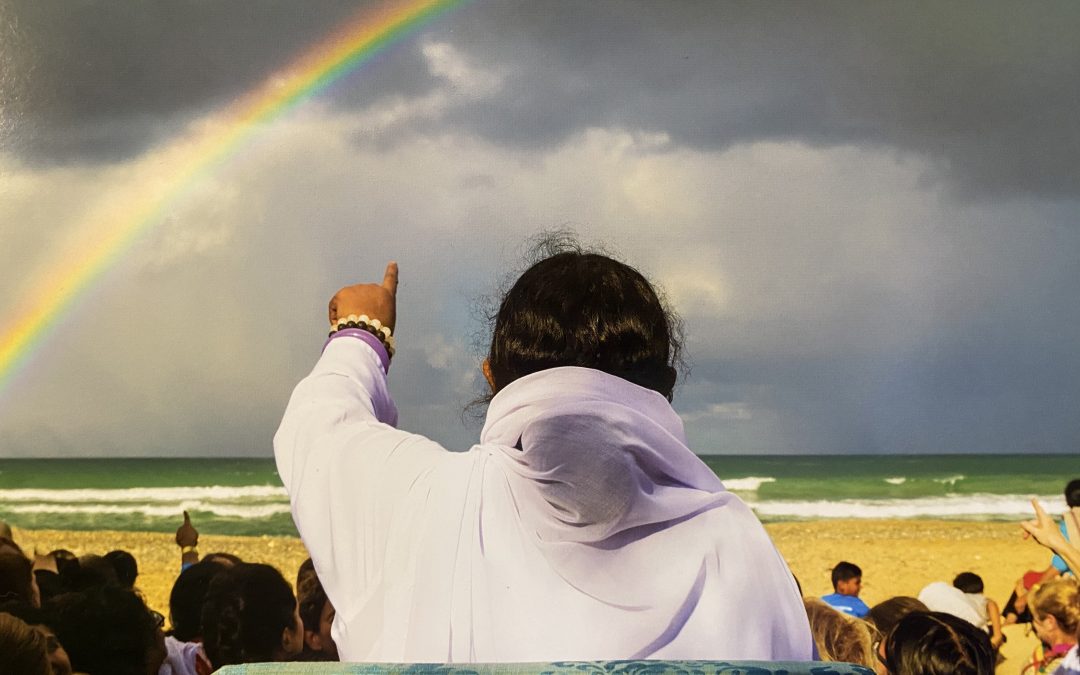 Tonight’s Full Moon in sidereal Sagittarius is the auspicious one known as Guru Purnima, a day for honoring our teachers, especially the satgurus and saints who bring light and truth to the world. The Full Moon peaks at 9:45pm PDT tonight, July 4th, and is accompanied by a penumbral lunar eclipse that peaks at 9:29 pm PDT. Though visible from the Americas, Africa, and Western Europe, this eclipse only brings a partial shadow across one side of the Moon. Its effects are being felt profoundly, however, during this cycle of change that has come with the two prior eclipses this summer.

Guru in Sanskrit is often translated as dispeller of darkness, or ignorance. We live with so much suffering as humans, because even through a lifetime most of us are still immature to a degree that we haven’t found peace with the bounty offered to us by divine creation. That is not to say that hardship and real suffering does not exist, but great souls and saints, and even many elders who have “lived through it all” have still been able to find a certain equanimity towards life’s difficulties, along with compassion and an attitude of service, however small, for those who are hurting.

“By cultivating attitudes of friendliness toward the happy, compassion for the unhappy, delight in the virtuous, and disregard toward the wicked, the mind retains its undisturbed calmness.”

We could dive into a full discussion of all of these, especially in these trying times. In the last point “disregard” could be also understood as indifference or equanimity … though I believe as humans anger has a place on the path to this level of peace. But the Guru has the ability to bless us with a grace to move beyond this anger and into a place of peace and spiritual strength, despite whatever outside circumstances may be.

The Moon joins “Guru” (Jupiter) in his home-sign of (sidereal) Sagittarius this year. A bright, retrograde Jupiter can be seen close to the Moon tonight… though the south node Ketu also brings his (usually) invisible presence here, creating the shadow effect that will pass over the Moon. (Though of course the actual shadow is a result of the earth’s position, Earth, Sun and Moon are aligned with Rahu and Ketu astronomically, signaling the eclipses.)

Sagittarius is aligned with the galactic center, and is the active fire sign of Jupiter, a planet who guides our values, ideas, and philosophies. This eclipse cycle (including the eclipses of June 5th and June 20th) has brought up a lot of the shadows inherent in our cultural philosophy and values, stirring the pot over such things as hygiene (coronavirus management), race, and of course politics. During tonight’s eclipse, through dedicated practice and Guru’s grace, we may have the opportunity to see some of our cloudy thinking and remove the shadows of ignorance, both individually and collectively, that have hindered us through history.

The Guru Purnima Full Moon eclipse aligns with the Vedic nakshatra of Purvaashada, “the undefeated.” This star-sign brings strength as well as love and compassion, with a feminine energy ruled by Venus and the deity Apas (water personified). It is a place where we may battle over ideas, but ultimately truth will always be victorious in the end.

The nodes have been harnessing strength over the course of this year since mid-February when the Kala Sarpa cycles began (the two weeks of each month when all planets are on one side of the nodal axis). As the Sun moves into sidereal Cancer on July 15th, this will break the cycle, making these periods impossible through the end of the year. These cycles are not entirely rare, however, so we should not attribute current events to this alone (they have been happening every year for the last several.

Jupiter and Saturn continue their retrograde cycles through the fall, giving us an opportunity to dive deep into our philosophies and values and the structures we use to support these, making change particularly at the macro level as they travel through their homes signs of Sagittarius and Capricorn, respectively. Mars will also gain strength when he enters his home sign of Aries on August 16th, and then going through a retrograde cycle from September 9th through November 13th.

Personal readings are available Here to help you navigate this time.