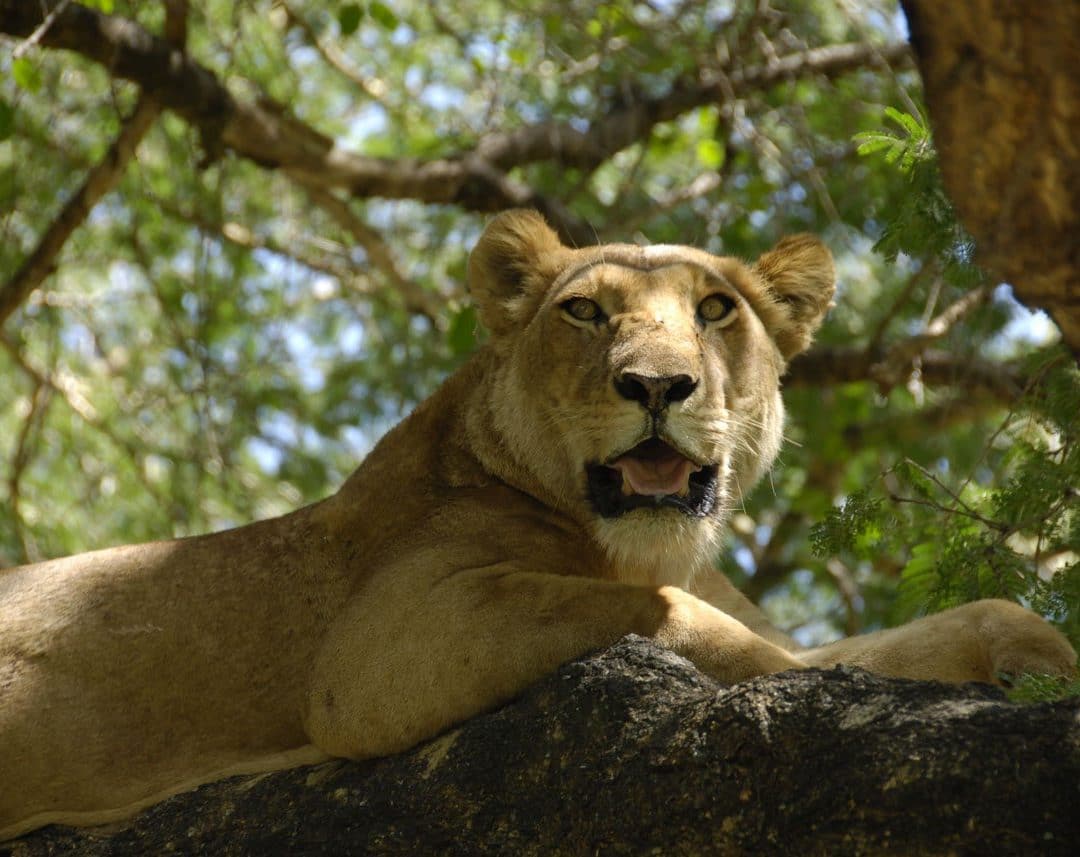 The Sun and Moon will reach exact alignment for a New Moon in Leo at 11:02 am PDT this Sunday, September 9th. In sidereal Leo they join Mercury and begin a lunar cycle directed by the Sun himself, the ruler of Leo. Saturday night brings the darkest Moon phase as the Moon wanes to total obscurity, and is the best time for letting go of the past lunar cycle and preparing for the new. 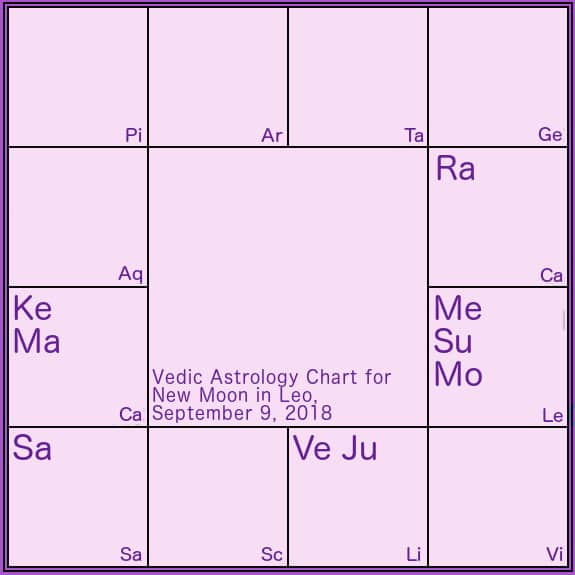 The Sun is the graha (celestial body or being that grabs us with its force) that we see and experience the effects of the most frequently. Each day he rises and sets, bringing light by day to go out and move out energy through the world, disappearing at night as our energy descends and go into a temporary hibernation. During the Leo cycle, the Sun’s energy is even more powerful, as he is currently seated in his throne, or transiting his own sign of Leo, we could say.

As we begin to notice the hours of the day shortening (or lengthening, depending on your location), as we approach the equinox, awareness of the importance of this light becomes more apparent, and it may be a time where we strive to harness it and more through life as energetically as we can. The Leo cycle makes us aware of our inner light and strength, symbolized by the source energy offered to us from the Sun.

As we go through this cycle it is a time to examine our power and how we are using it. The great strength of kings and queens allows them to be either great samaritans or great tyrants. The highest calling of Leo is to use our power for the good of others, making sacrifices in our personal lives for the duty or responsibility to a larger cause. Four out of five of the last U.S. Presidents had Leo rising or Sun in Leo.

Rising to great power is not generally easy on the individual, however, but it can be purifying. The Sun is considered a krura or cruel planet in Jyotish, meaning he teaches us life’s lessons through more difficult processes. He is also a sattvic planet, however, helping to bring us towards a state of greater peace and alignment. The bright fire of the Sun both illuminates our power and our weakness, our strengths and our shortcomings, and helps to purify us by burning away what is not needed.

This new Moon cycle begins with Sun and Moon joined in Purva Phalguni, the Vedic nakshatra (star-sign) that spans the middle of sidereal Leo. This star, called “the little fig tree” is a star of recreation and relaxation, symbolized by a swinging hammock or the front legs of the bed. In the center of Leo, it shows the leisure that can and should be endured at times in the midst of being busy using our power to take care of our responsibilities. Ruled by the planet Venus and by Bhaga, the god of delight, this star carries a sexual energy and in general draws us towards beauty and luxury. 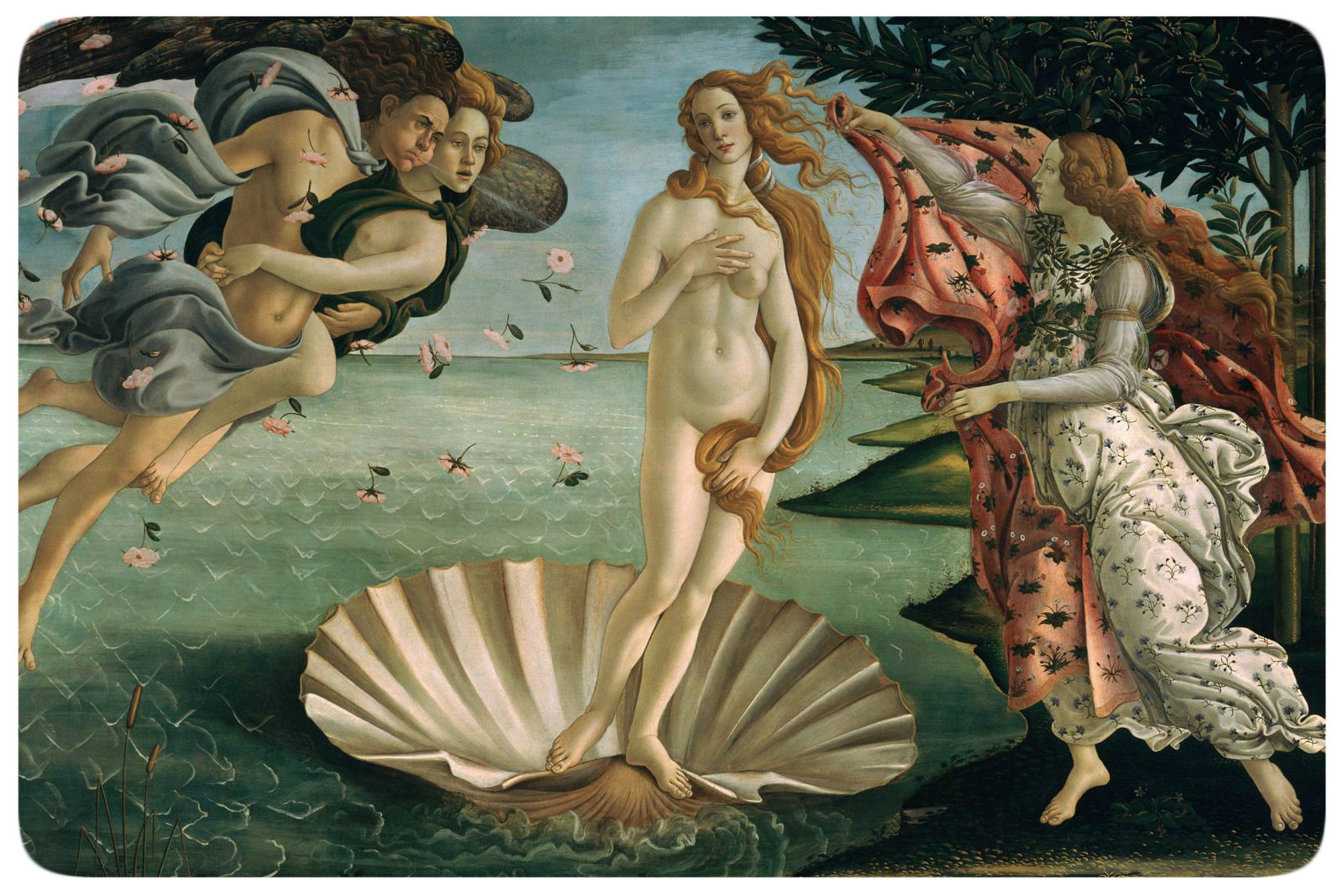 Venus is now out of sidereal Virgo, his sign of debilitation, and transiting his own sign of Libra, making the pleasure principles even more enhanced this cycle, and for the next several months. Venus will go into his cycle of retrograde motion from October 5th through November 11th this year, remaining in Libra the entire time, and will not leave this sign until January 1st, 2019. The last time we had a long stretch of Venus in one sign, including his retrograde cycle, was with Venus in Pisces from January 27th through May 30th of 2017.

This long stretch of Venus in his own sign will bring positive influence to relationships in general, as well as happiness and prosperity (of course other factors in your individual chart will affect this, but this will be more of a societal trend). We are likely to see a flourishing of the arts, or you may find more interest in art, music, or nature in your own personal life. Like the prior long-stint of Venus in Pisces, his sign of exaltation, it is possible that we will tend towards an over-indulgence in sensory pleasures during this transit, but perhaps less likely. With Venus sva, established in the sing of his self, more stability is possible, as we learn the lessons of appropriate compromise offered by Libra.

Mars and Saturn have become stationary-direct in recent days, with Mars coming to an apparent stop and now slowly beginning direct motion since September 27th, and Saturn stationing fully on September 6th, and will soon begin to make his forward progress through Sagittarius once again. For those of you ruled by either of these planets, or having important issues in your lives ruled over them, you will begin to see things moving in a forward direction again soon.

Mars, however, is still in Capricorn and now once-again approaching Ketu, meaning he will make a third and final exact conjunction with him again on September 22nd. Mars has been in Capricorn, his sign of exaltation, since May 2nd, and will not leave this sign until November 5th. He passed directly over Ketu on June 13th and July 18th, and has been in retrograde motion since July 10th.

Along with two eclipses resulting from the nodal alignments, July also brought the return of the Kaala Sarpa yoga cycles. This indicates an alignment of the planets during which all grahas are on one side of the Rahu-Ketu axis. As the Moon cycles in and out of this half of the zodiac monthly, we experience the kaala sarpa cycles for roughly two weeks at a time throughout this period. We are currently in one of these cycles from September 5th through the 21st. This period can bring up intense shadow work, especially in the realms that have been stirred up for you by this year’s nodal transit and the location of the eclipses in relation to your chart. 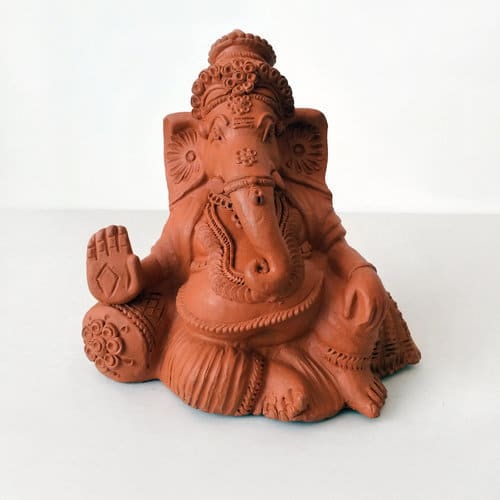 Thankfully, we celebrate the birth of the remover of obstacles this week, with Ganesh Chaturthi, on September 12th. The chaturthi or fourth day of this lunar cycle commemorates the birth of Lord Ganesha, whom we can call about to create a more clear path in our lives. On this day we can celebrate him through puja and prayer, and it is often customary to build a statue of Ganesha (out of natural clay), for our worship, and then release him into a body of water on the tenth day of prayer.

Because of an old dispute between Ganesha and the Moon, Chandra, it is advised not to look at the Moon on Ganesh Chaturthi.