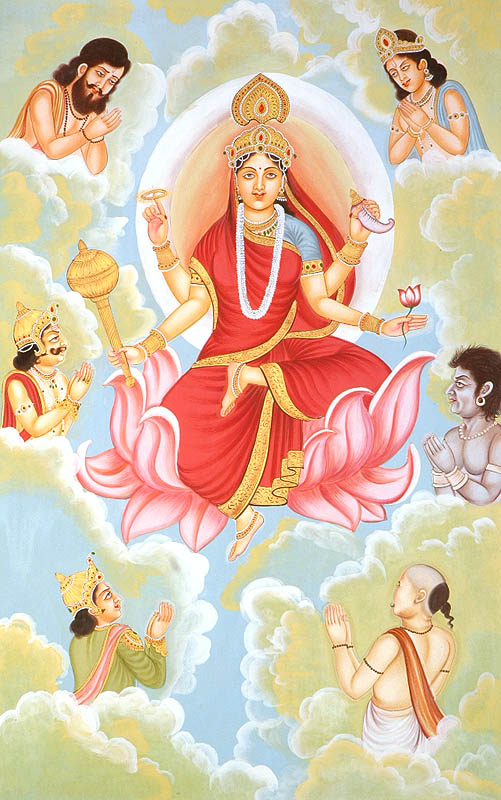 The ninth day of Navaratri is of utmost importance, and is marked by shukla navami, the ninth tithi (lunar phase) of the waxing Moon this month. On this day we honor Goddess as Siddhidatri, the giver of all siddhis, special powers or perfect attainments. Siddhis are magical, spiritual, or psychic powers, attained through dedication and devoted practice. Through worship and meditation upon all the forms of Durga, culminating with that of Siddhidatri, we can attain perfection and infinite blessings from her. Through the siddhis, all desires can be fulfilled. It is often said that the greatest blessing one can receive is to transcend all desires, or to have one’s only desire be to know Goddess/God.

With the blessing of devotion, through her grace, we can remain peaceful and happy in all circumstances, blissfully experiencing the Divine Mother’s presence in and throughout all of creation, in every moment. In this way the ninth day of Navaratri also relates to the illuminating wisdom of Sarasvati, who is often worshiped over the last three days of this festival.

In her depiction, Siddhidatri sits on a lotus or a lion and holds a discus (representative of the chakras), a lotus, a mace, and conch shell, which she will use to sound the victory we attain through her worship. She is surrounded by and worshiped by all forms of divine beings–Gods, demons, spiritual masters and nature-spirits. It is said that even Lord Shiva received his powers from Siddhidatri. In the divine form that is half Shiva and half Shakti, he is merged with Siddhidatri and known as Ardhanarishvara.

Siddhidatri relates to Ketu (the south node of the Moon), and thus she governs our deep and ancient psychic wisdom. She is a powerful goddess to worship for enhancing spiritual, psychic and energetic healing powers. 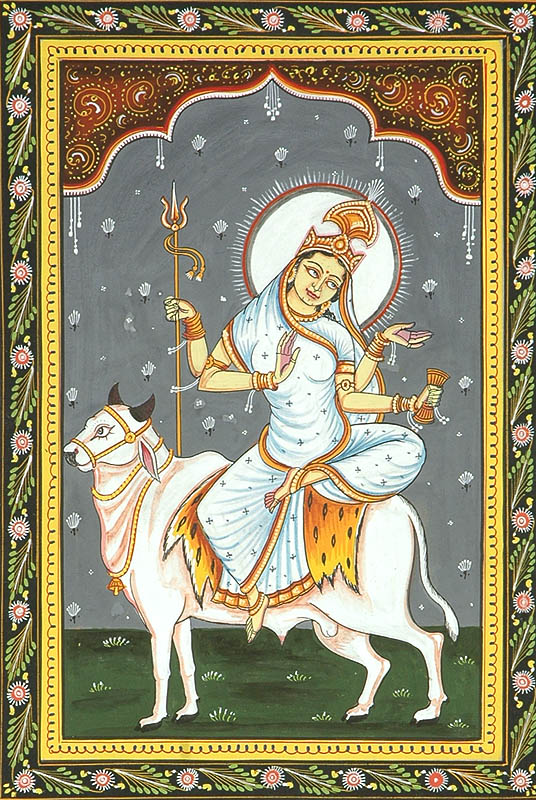 Shukla ashtami, the eighth tithi (lunar phase) of the waxing Moon this month, marks the eighth day of Navaratri during which we honor Goddess as Mahagauri, the “great white” goddess. This incarnation of Durga is fair, shining and radiant like pure light, representing her purifying shakti. She rides a bull and carries a damaru (a hand-drum) and a trisul in two hands, keeping the other two in mudras for blessing and protecting. She represents compassion, truth, and purity and bestows these on her devotees. Mahagauri is often thought of as the young form of Parvati, and thus worshipers often feed young girls sweets on this day of celebration, to honor the great white goddess.

The story is often told that while Parvati was doing penance to win Lord Shiva, her body became black and dirty. When Shiva accepted her he washed her with the water of the Ganga which made her shine resplendently and become Mahagauri. This represents her power to free us from all pain and suffering and to bless us with auspiciousness and virtues, as those who bathe in the waters of the holy river Ganga are said to be blessed and purified. This includes freeing us from the painful attachments to the material world. As we worship Mahagauri after the night of worship dedicated to Kalaratri, we can see that this detachment and reemergence into the light can come only after facing death and darkness.

This goddess relates to the planetary deity Rahu (the north node of the Moon), who is actually a shadow point in the cosmos and has no physical body. Thus Mahagauri relates to parts of our soul and psyche that are beyond the physical body or chakra system. In our worship, making offerings to her and meditating upon her, we can begin to go beyond our attachments to the mundane details of life and brighten our awareness of spirit. 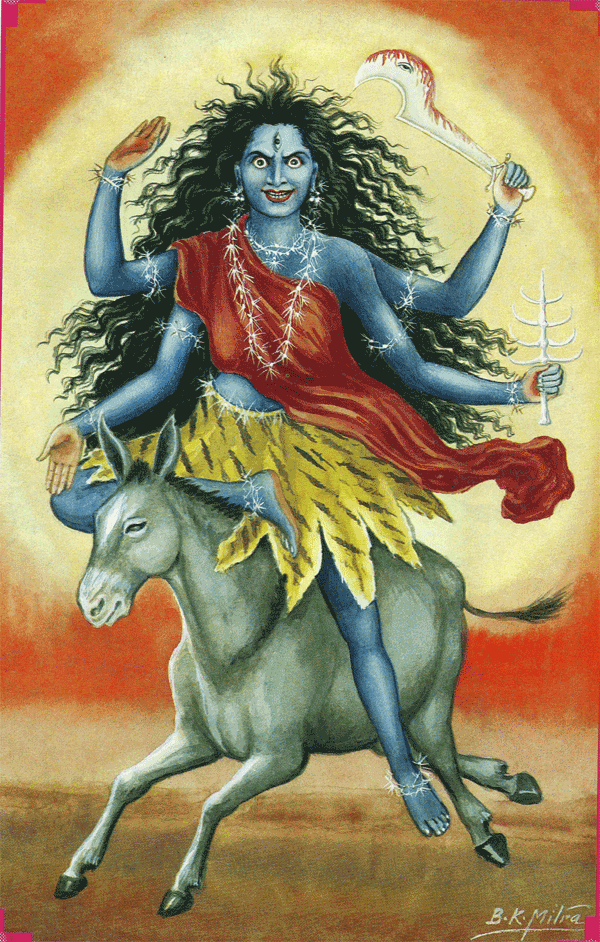 Shukla sapthami, the seventh tithi (lunar phase) of the waxing Moon this month, marks the seventh day of Navaratri wherein we honor Goddess as Kalaratri, a dark and fierce form of Durga. She has wild black hair, dark complexion, three red eyes, and flaming nostrils. She rides a donkey, and carries a sword and a cleaver in two hands, while her two other hands are in mudras offering blessings and protection.

“Kala” refers to time, darkness, and therefore death. “Ratri” is night, and the presence of this goddess signifies a night of facing death and darkness. She reminds us that these are parts of the experience of life. By facing these aspects, and by worshiping Kalaratri, we can be freed from the pain and suffering associated with them. She is by our side bravely and compassionately as we face the morbid and terrifying aspects of existence, and helps to destroy our fears and weaknesses, giving us great strength.

She is an expression of Kali, whose fearful form was birthed from Durga’s third eye when Durga needed more strength and ferocity to fight the demon Raktabija. She is also called Shubhankari, she who does auspicious deeds, and reminds us that we have nothing to fear from her, and nothing to fear, ever. The compassionate energy of the Divine Mother is always working through all parts of creation, even in the processes of destruction. Kalaratri rules Saturn (Shani), who also represents time and ultimate death, and offers us the opportunity for expanded consciousness through meditation on this inevitability. By worshiping Kalaratri on the seventh day of Navaratri and meditating on her deeply, we connect with the sahasrara (crown) chakra, and the barriers between mind, body, and spirit begin to dissolve. She blesses us with happiness and courage, helping to remove sadness, pain, and fear.

In some areas, the seventh day of Navaratri begins the worship of Sarasvati. Having worshiped Durga and Lakshmi for three days and nights each, to remove obstacles and obtain spiritual wealth. Now the devotee is ready to receive knowledge, which comes from Sarasvati, the goddess of learning. In other schools of worship, such as Kalikula in Nepal, Sarasvati is celebrated for the first three nights, followed by Lakshmi, and the last three nights are dedicated to Kali. 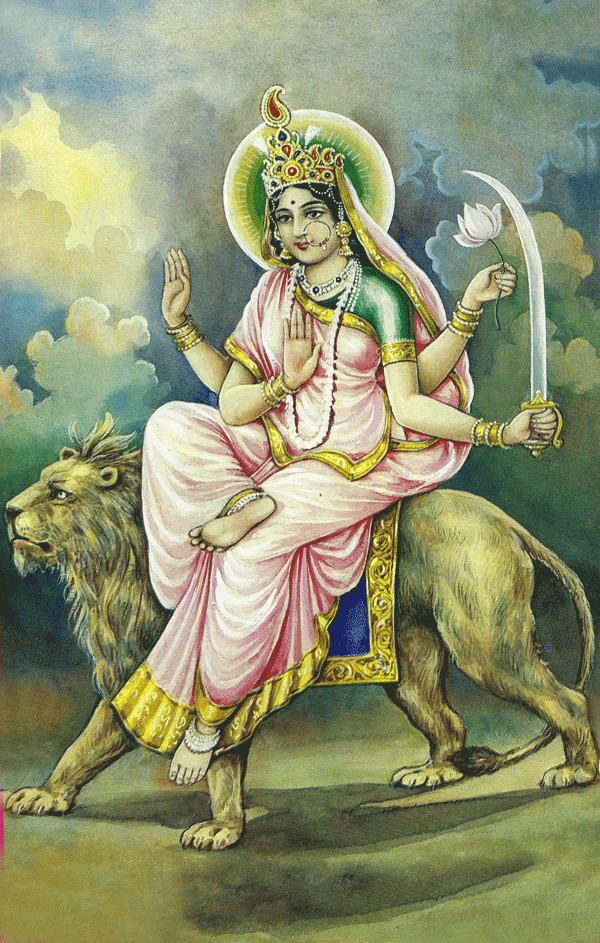 Shukla shashthi, the sixth tithi (lunar phase) of the waxing Moon this month, marks the sixth day of Navaratri wherein we celebrate Goddess in the form of Katyayani, the warrioress who destroyed Mahishasura (the buffalo demon). Mahishasura had been granted a boon (unbreakable wish) from Lord Brahma that determined that no man could kill him. Thus, when he was terrorizing the earth and heavens, the Gods summoned Goddess Durga to come and save them. This form of Durga is named Katyayani, for her father Katya, a devoted sage who did rigorous penance in order to have Durga take birth as his daughter.

Katyayani takes a fierce form of the Divine Mother when we call upon her to destroy our demons, including both internal negativities and external obstacles to material and spiritual success. She relates to the ajna (the third-eye) chakra, where we draw our concentration during worship today. 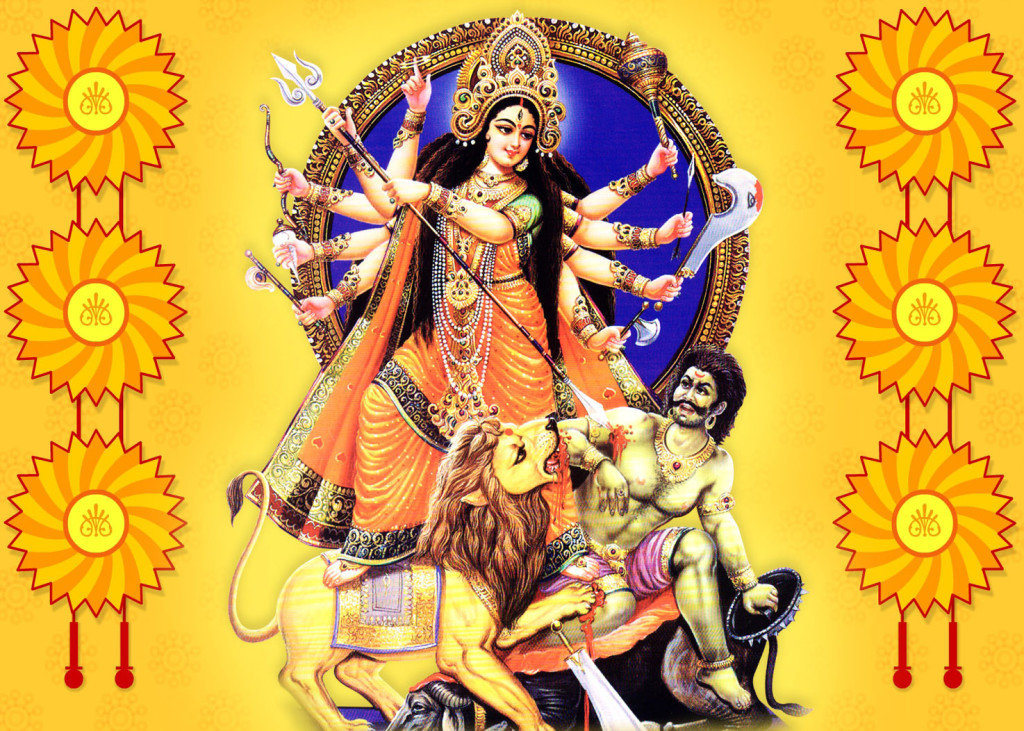 Katyayani relates to fervent devotion, and it is told that she was also worshipped by the Gopis of Vrindavan, who called on her to help them win Lord Krishna as their husband.

It is said that worshiping Katyayani will help in bringing a good relationship and marriage, as she bestows the strength to remove obstacles. She also rules Jupiter (Guru), who represents husband in a woman’s astrological chart. Jupiter brings grace, expansion, and optimism, just as Katyayani helps us to fight sorrow and fear. Katyayani is related to fragrances, and offering her incense and other aromatics is a good practice to include in worship today. Through healing scents she helps us to fight disease and improve health. She holds both a lotus and a sword in two of her hands, and holds the other two in mudras offering protection and blessings. 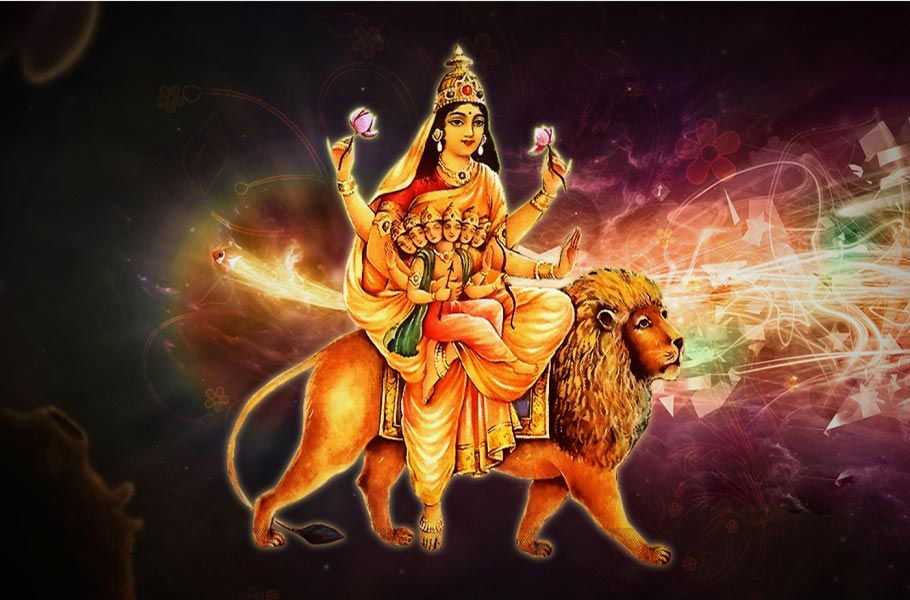 Shukla panchami, the fifth tithi (lunar phase) of the waxing Moon this month, marks the fifth day of Navaratri wherein we celebrate Goddess in the form of Skandamata (literally the “mother of Skanda”). Skanda is a name for Kartikeya (also known as Murugun and Subramanya), the brother of Ganesha (both sons of Shiva and Parvati). We see Skandamata depicted holding her young six-headed son, as well as holding lotus flowers and keeping one hand in a blessing mudra. In worshiping her we call forth the protection and care that the Divine Mother has for all of creation, as all are her children. She blesses us with bliss, happiness, and motherly love, as well as nourishment and good health.

Kartikeya is the Lord of War, the leader of the army of devas (Gods) who fight the asuras (demons) in Hindu mythology. In the stories, the demon Tarakasura was tormenting all of humanity, and it was destined that only Lord Shiva’s son would be able to kill him and save the world. Shiva had renounced everything and was lost in meditation, however, after the death of his first wife, Sati. The Gods devised a plan and ensured that Parvati was born (a reincarnation of Sati), and followed a path that would result in Shiva’s emerging from meditation and remarrying. When they finally married, Shiva and Parvati ended up making love for millions of years while the world awaited their savior. Eventually, the fire deity, Agni, snuck into their cave in order to steal the seed that was needed. It was so hot that he could not hold it, however, and dropped it in the river Ganga (another manifestation of Goddess), who deposited the infant Skanda on her banks where he was found and nourished by six women (thus the six heads).

The demons represent the ignorance which gives rise to all human impurities and misfortune. In worshiping Skandamata we also worship Skanda and receive his blessings, including protection from harm and victory over our enemies, both internal and external. Skandamata relates to the vishuddhi (throat chakra), meaning “pure” or “undiluted,” showing that we can attain purity and realize infinite blessings through her worship. She is rules the planet Mercury (Budha), the planet and deity of communication and the intellect.