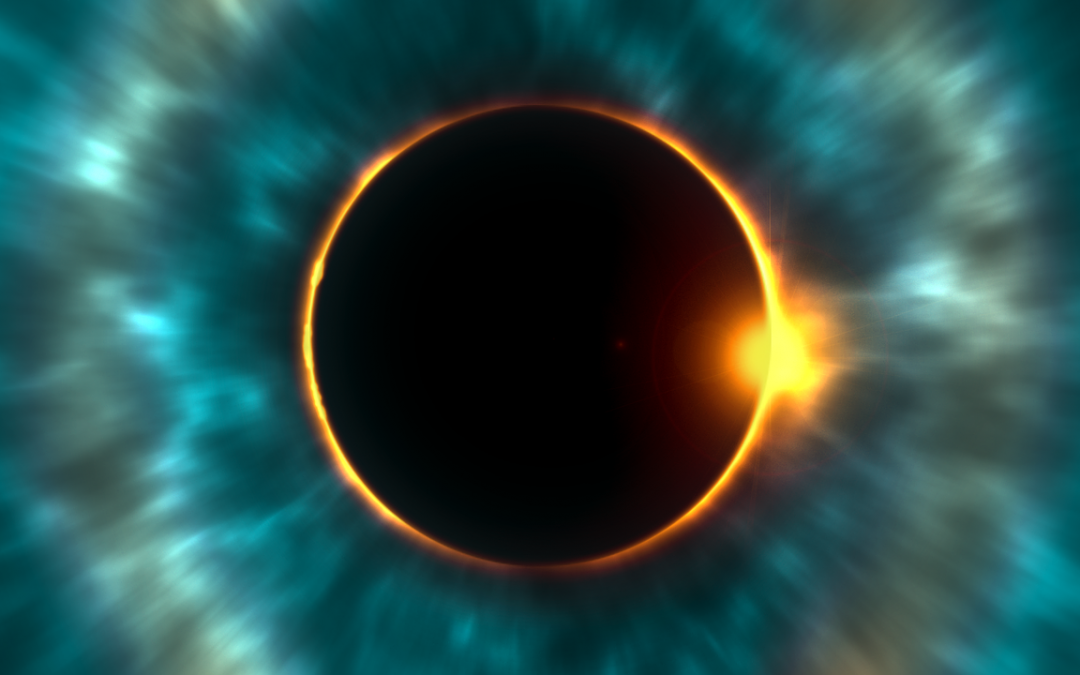 This month as the Dark Moon and the Sun come together, the Moon will cast his shadow fully across the Sun for a Total Solar Eclipse in sidereal Gemini, on Tuesday, July 2nd. The eclipse maximum will be at 12:22 pm PDT, just a few minutes after the exact New Moon (Sun-Moon alignment) at 12:16 pm. The time from the very beginning to end of the eclipse will be from 9:55 am through 2:50 pm PDT, but it will only be visible from the southeast Pacific and a few places in South America (see map). Nevertheless, we will feel the effects worldwide, as the light of the Sun (our strength and connection to source) is temporarily blocked out, due to the Moon’s close proximity with the shadow planet, north node Rahu.

We’ve already been experiencing the effects of this eclipse for several weeks (possibly as far back as a month, when the last lunar cycle began). The Sun has been in the same sign as Rahu and the nodes have also gathered power by amplifying that of the two malefics with whom they’ve been conjunct. Saturn has been conjunct Ketu, in Sagittarius, since March and has been moving within one degree of him since late April, while Rahu was conjunct Mars in Gemini from May 6th through June 21st. When the nodes join another planet they intensify the power of that planet, and both Mars and Saturn are ones who have tougher lessons to teach us.

This eclipse, and the following lunar eclipse on the July 16th full Moon, will bring to the forefront any shadow work that we have to do along the Gemini-Sagittarius axis. In a general sense, this means you will see the imbalance between your practical, analytical mind, and your idealistic action-oriented motivations. There are many layers to add to this, however, due to the conjunction of Saturn with Ketu (and until recently, Mars), with Rahu, Sun and Moon. You will be seeing your shadows or imbalances in the areas of life indicated by Gemini and Sagittarius in your natal chart, and any planets you have there natally will also be affected. 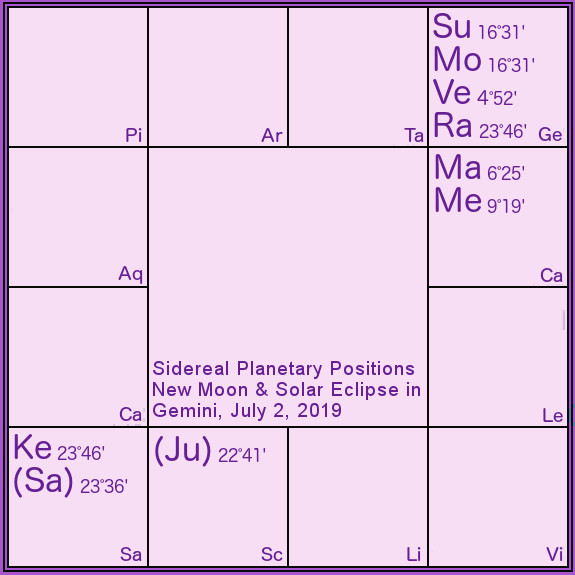 The Gemini cycle, beginning on this New Moon, is one ruled by Mercury, the planet of the intelllect. Gemini, or Mithuna, “the twins,” is a dual air sign, one which brings a lot of movement, especially of the mind. It is a place where we are able to step into another person’s shoes, or to see both sides of a situation or argument. You may also feel that you have too many ideas coming in (obsessive thoughts much?), and with Rahu here now, you may also have too many words coming out. Be careful of your speech this month, and make sure what you choose to say is true, necessary, and kind. This is a month where only one or two out of three could prove sorely insufficient.

Furthermore, the Sun and Moon are coinciding for this New Moon in Ardra nakshatra. Ardra is known as “the moist one,” but is not as gentle as that might sound. It is ruled by Rudra, a fierce form of Lord Shiva, and the one associated with storms. The moisture comes from a turbulent tempest, and we may experience some destructive forces of nature or human nature occurring on or near the solar eclipse in Ardra.

After his amplified six weeks with Rahu, Mars has now moved into Cancer where he is debilitated. Mars is the warrior, the inner fighter (who motivates our outer fighter), and the planet of concentrated action. In Cancer, he becomes neecha or debilitated because Cancer is the gentle, watery sign of the Moon. It is a place of comfort and nurturing. This could give our fiery spirit a chance to take a break and soften a bit, but you may find yourself lacking the courage or strength needed for certain activities.

Mercury and Mars will be in a planetary war, graha yuddha, from July 7th-9th, just as Mercury stations and begins retrograde motion (July 7th). The war between these two can pin our rational side against our gut and inner power. With Mars debilitated and Mercury sva in his own sign, you may find the intellect winning out over the gut.

This is a great time to have a personal reading– either an Initial Reading (includes looking at the eclipses) if this is your first time working with me, or an Eclipse Reading if we have had a previous session.