Tonight brings a dark Moon as the Moon joins the Sun in sidereal Virgo. Exact New Moon in Virgo will be at 11:26 am PT on Saturday, September 28th. This begins a Virgo cycle that will help us to connect with the earth, the feminine, and draw ourselves more inward as we enter the season of the Sun’s decent in the northern hemisphere.

We’ve just passed the equinox on September 23rd, the time where night and day are of equal lengths, and we are now entering the yin season where the hours of darkness will exceed the hours of light. This first full lunar cycle begins in Virgo, a feminine earth sign, that encourages us to ground out some of the activity of summer and turn inwards as we come upon this darker season.

Virgo is also ruled by Mercury, the planet of the intellect, which will get us thinking about practicality and logistics this month. Have you planned your store for winter, getting together everything you need and tying up loose ends in the world before your period of inward attention and maybe even hybernation? Mercury is still technically joining the Sun and Moon in Virgo as we begin this cycle, but will be passing into Libra the next day. Venus and Mars also join in Virgo now, making our nights especially dark as these three stay close to the sun and only Jupiter and Saturn are visible. Venus remains debilitated in Virgo for just a few more days, until October 3rd. 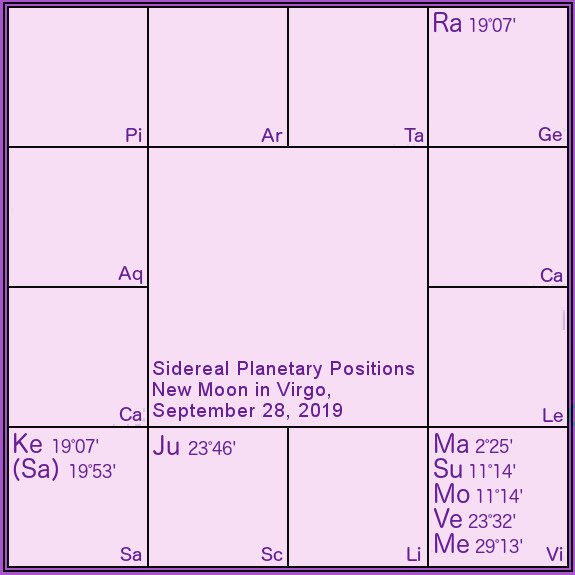 This New Moon occurs with Sun and Moon in Hasta nakshatra, the sign of the hand. Hasta is a place that allows us to hone our skills, both manual and intellectual. It offers us a “craftiness,” whether literal, or of mind. This is a good time for getting into any hands-on work that requires dexterity, as well as for business dealings or other organization that requires tact and skill. Hasta is ruled by Savitar, the Sun God, while also linked to the Moon’s influence, and its animal is the female buffalo.

The New Moon this month brings one of the largest Hindu festivals of the year, Maha Navaratri. Navaratri means “the nine nights,” and beginning with the first Moon phase after the dark Moon, the Goddess Devi is celebrated through many forms for the following nine nights and ten days. In North America Navaratri will be celebrated from September 29th through October 8th, with October 8th being the 10th day of Victory (an auspicious time for starting new endeavors, after 9 nights of worship). In some places Navaratri celebrates the goddess Durga in nine of her forms, while in other parts of India the festival commemorates Durga/Kali, Lakshmi, and Sarasvati for three nights each.

This festival is a time for honoring and celebrating the supreme feminine power in all her glory, and the many blessings she bestows upon us. Read more about Maha Navaratri 2019 here, and stay tuned for daily updates on how to connect with the many forms of the Goddess.

This year’s festival could churn up even more internal difficulties than usual … offer them to the Goddess! We are currently under a Kala Sarpa cycle, with all planets to one side of the Rahu-Ketu axis, and will be in this alignment until October 6th. This can bring up more shadow energy and sticky spots than usual, especially if you are running a Rahu-Ketu dasha or have these planets prominently in your chart. It’s all the more reason to join the festivities and offer worship or some kind of spiritual practice during these days.

The good news on the nodal front — Saturn and Ketu will finally be separating a bit, and will leave their 1-degree proximity on October 1st! With Mean Node calculations, Ketu and Saturn have been joined within one degree of each other since April 25th! This will begin to slowly take some pressure off in the area of your life shown by Sagittarius, or those ruled by Saturn.