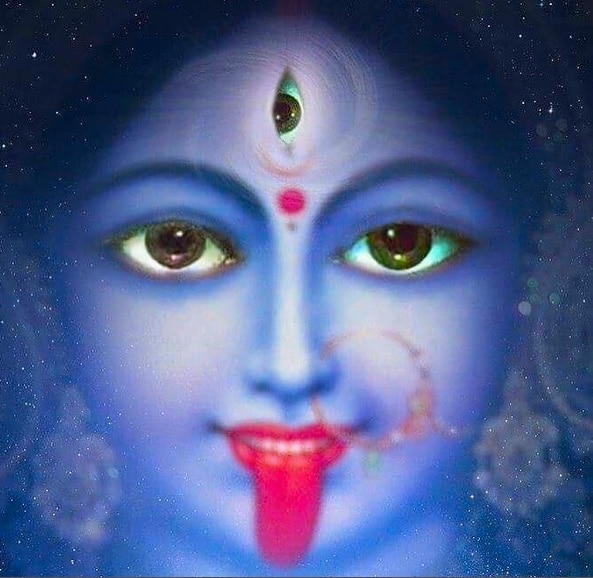 Tonight brings the dark Moon, coming towards a Moon-Sun alignment to begin a new Moon cycle on October 16th at 3:31 pm EDT, at the very end of sidereal Virgo (29°46’). This is also the start of the autumnal, Sharada or Maha Navaratri, which celebrates Goddess Durga and many forms of the goddess through on each of the first nine nights of the waxing Moon this month— October 16th through 24th in North America this year.

Though the Sun and Moon align at the end of Virgo, they will move together into sidereal Libra only a few hours after the New Moon moment, thus beginning a lunar cycle with the Sun traveling through Libra. Libra energy is about balance. It is ruled by Venus, the planet of pleasure, harmony, and beauty. In a world that feels so imbalanced, our collective and individual energy will shift in ways that attempt to create greater balance, more compromise, and hopefully more harmony and beauty across the planet. The full Moon on October 31st will highlight Aries energy, Libra’s opposite, drawing us towards expressions of individual strength and will.

The Sun is debilitated in Libra, because when we strive to compromise and take care of others we often do so at the expense of our own self-care. Remember that self-care is especially important this month when the Sun is at its weakest, and the seasons are changing from Pitta to Vata time across most of the northern hemisphere. In Ayurveda this seasonal junction is a good time to do some light cleansing but nothing that is too depleting as we move into vata time.

Mercury and Mars are still traveling in retrograde motion in Libra and Pisces, respectively. Mercury will station on November 3rd, election day in the U.S., sending his focused rays of attention and balance towards us. This could be favorable for bringing more rational and practical equilibrium into the political system. Mars will station and turn direct on November 11th, also directing some potent energy towards us, this time martial in nature which could stimulate some violence or fires, though not as drastic as we saw around his last station on October 3rd. 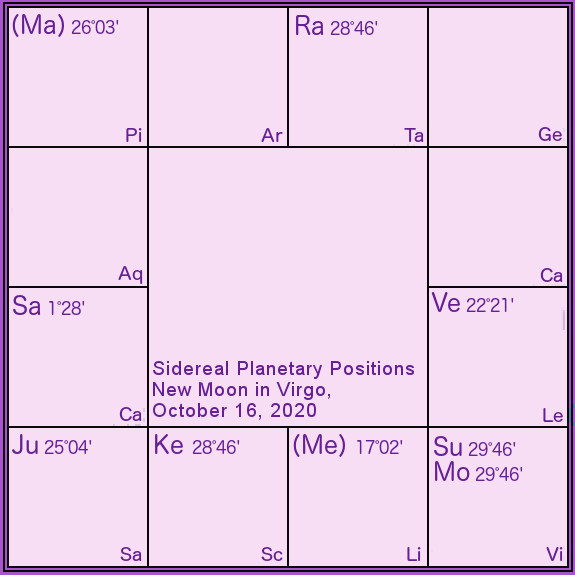 This new Moon aligns with the Sun under Chitra nakshatra, “the brilliant.” This star-sign correlates with Spica, the brightest star in the sky, and bridges Virgo and Libra. It is ruled by Vishvakarma, the celestial architect. Moving from Virgo to Libra it combines both the energy of precision and perfection with that of beauty and grace. What are you trying to construct in the world that could use more architectural precision as well as beauty? This is a good time to call in this energy and channel it into any projects on your plate. Be careful that your inspiration does not lead to overindulgence under this intense nakshtra, whose animal symbol is the female tiger.

The New Moon this month brings one of the largest Hindu festivals of the year, Maha Navaratri. Navaratri means “the nine nights,” and beginning with the first Moon phase after the dark Moon, the Goddess Devi is celebrated through many forms for the following nine nights and ten days. In North America Navaratri will be celebrated from October 16th through October 25th, with October 25th being the 10th day of Victory (an auspicious time for starting new endeavors, after 9 nights of worship). In some places Navaratri celebrates the goddess Durga in nine of her forms, while in other parts of India the festival commemorates Durga/Kali, Lakshmi, and Sarasvati for three nights each.

This festival is a time for honoring and celebrating the supreme feminine power in all her glory, and the many blessings she bestows upon us. Stay tuned for daily updates on how to connect with the many forms of the Goddess.