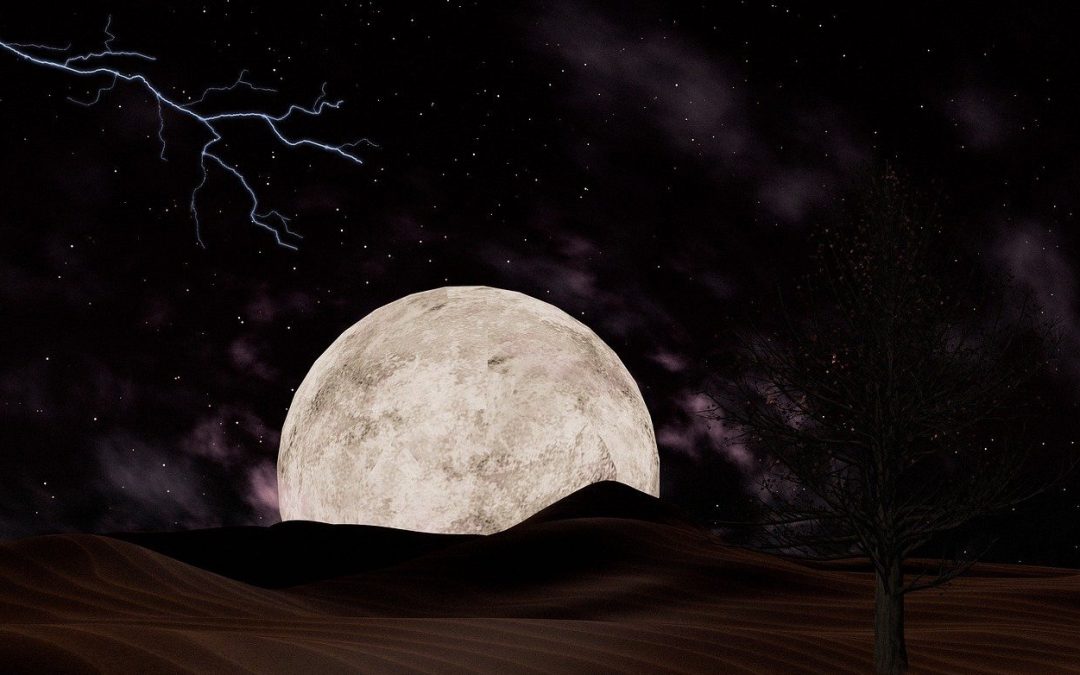 The full Moon peaks near 15 degrees sidereal Gemini, opposite a Sun and Mercury in sidereal Sagittarius, tonight at 10:28pm EST. The Moon is full in the Vedic nakshatra of Ardra, the “moist one,” a stormy and turbulent place in the zodiac. Saturn and Jupiter are still within one degree but growing further apart tomorrow, ending the planetary war they have waged since December 12th. The Moon will wane its way into the New Year before beginning the first lunar cycle of 2021 on January 13th.

The lunar cycle began with Sun and Moon at the tail end of Scorpio, in the gandanta zone that bridges Scorpio and Sag’, before moving into Sagittarius soon after for a Sun cycle with flavors of both signs. With the Sun in Sagittarius we try to find our power by aligning our actions with our beliefs, seeking higher purpose in a set of teachings or philosophy that speaks to and inspires us.

With the full Moon illuminated in Gemini, we check in with our Mercurial side, searching for what is practical and fun rather than more serious and “important” feeling. Gemini helps us to see both sides of the coin, or to step into someone else’s shoes, which can help us to see past our own staunch belief systems by which we try to live. It can help us to be a little more flexible, and a little bit less dogmatic, in an age that feels so philosophically polarized across the globe. Hopefully this can help set the tone in the new year, giving us the ability to both live by our beliefs while being willing to dialogue and consider those that are opposite. 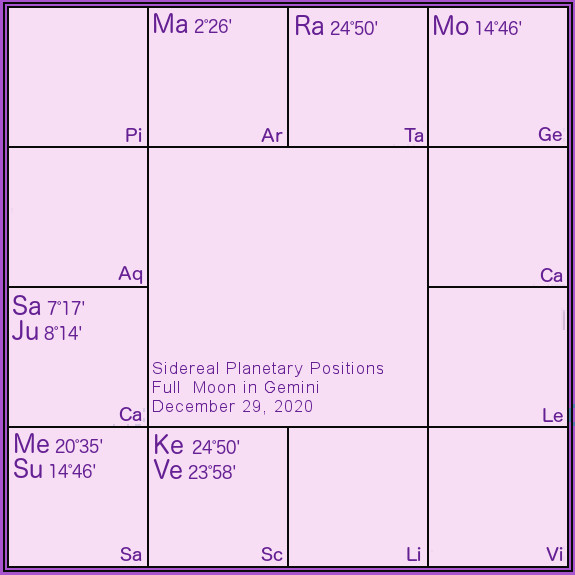 Ardra itself is a stormy and turbulent place in the zodiac. It is ruled by Rudra, a fierce form of Lord Shiva, and is associated with many violent and explosive moments throughout history. With the full Moon here we could see acts of outrage, or literal storms that may ravage some parts of the world tonight. Represented by a teardrop, this nakshatra elicits the sensation of grief… grief that must be processed in order for us to move forward. Under the illumination of this full Moon it is a good time to examine your own grief and allow the heart to churn it through so that something new may grow.

The Jupiter-Saturn conjunction turned into a planetary war from December 12th through 30th, while the two planets transit sidereal Capricorn within one degree of one another. Both may have suffered because of this … Saturn, who has put the pressure on this year as he transits his own sign, was probably not able to hold most people in total “lockdown” mode this month as many broke free of his fetters and enjoyed the holidays, whether still in their homes/pods or associating with more friends and family. Jupiter, the giver of hope and inspiration, was also suffering due to the war, and is also debilitated under Saturn’s rule here. The two made a glorious visual in the night sky over the past few weeks, coming closer in conjunction than they have in 800 years.

They will continue to transit Capricorn in conjunction until Jupiter enters sidereal Aquarius on April 5th, until a retrograde cycle sends him back into Capricorn from September 14th through November 20th. Jupiter is debilitated here and though he gets a bit of a boost from Saturn, inspiration, hope, and education will flourish more while he is in Aquarius rather than with Saturn in Capricorn.