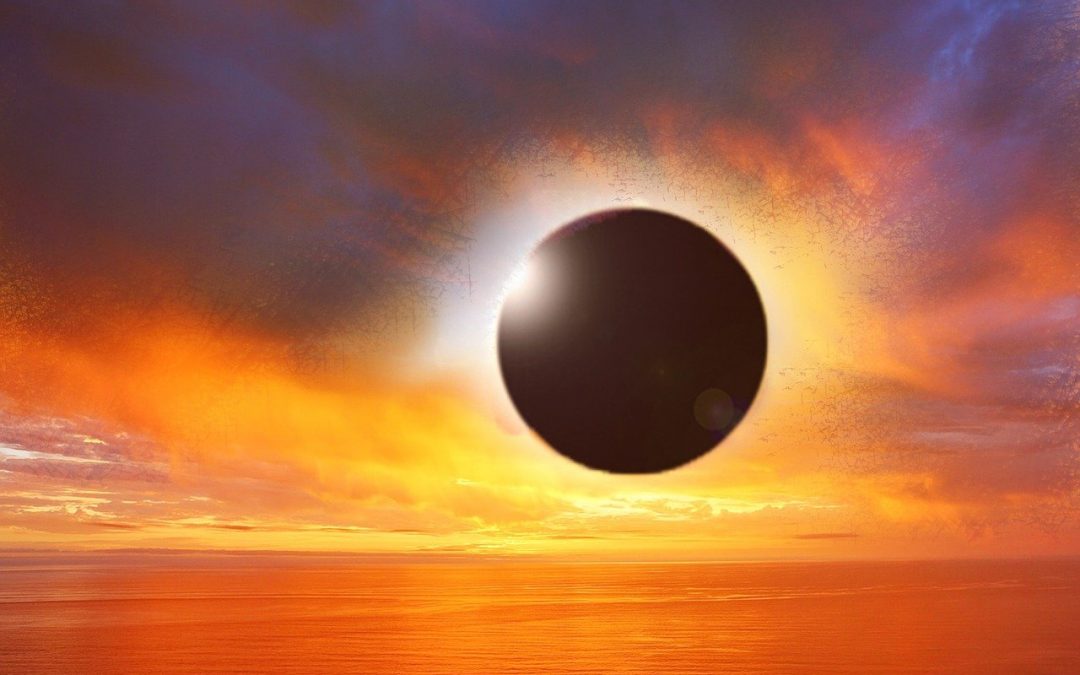 The Sun and Moon come together on this Dark Moon night, joining near the end of sidereal Scorpio as they come towards a full conjunction at 11:17 am ET on December 14th for a New Moon in Scorpio. Their conjunction is also aligned closely enough with the south node, Ketu, that it will cause a total Solar Eclipse from 8:33 am through 1:53 pm ET, with the maximum eclipse at 11:13 am ET. The eclipse will only be visible from South America and small portions of Africa and Antarctica.

In a total solar eclipse the Moon passes between the earth and the Sun, causing a shadow to appear over the Sun. This only occurs when Earth, Sun, and Moon are also closely aligned with the nodes, Rahu and Ketu, who are thought of as the shadow planets for this reason. These planets represent our deepest subconscious drivers. They are like our blind spots because we are not able to see them. During “eclipse season,” however, the shadows begin to become visible. This is a very important time of year to pay attention to any shadow work / inner demons / red flags that are arising for you. Great transformation is possible if we pay attention and do the work to honor what is being revealed. 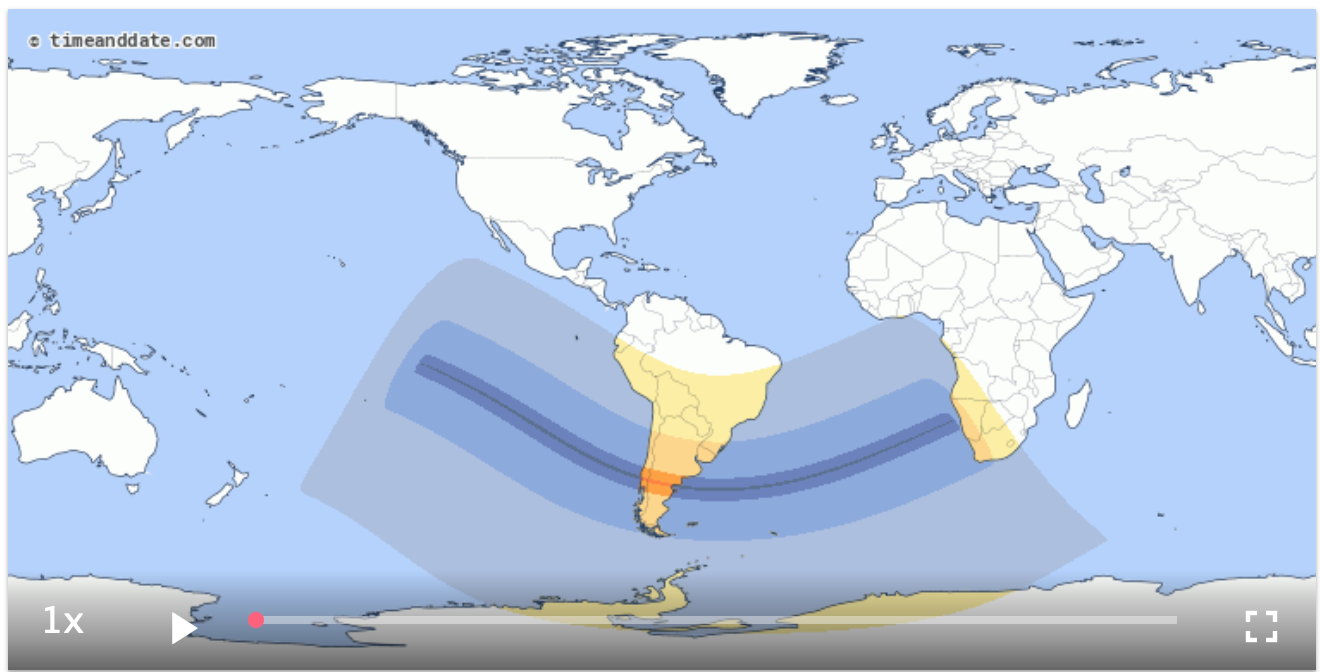 This is the first set of eclipses to occur with the nodes in their new positions. Rahu and Ketu entered Taurus and Scorpio, respectively, in September, and will transit here for a year-and-a-half, creating three eclipse cycles on this axis along their way. Whatever house-axis sidereal Scorpio-Taurus is in your natal chart, and whatever planets you have there, will be affected greatly by this eclipse cycles and the ones coming over the next year. This is where you have the most work to do and may be facing the most challenges currently.

On a global level, we experience this eclipse elevating the apparent tension between our desire for material stability (Taurus) and overhauling change, surprises, and even loss (Scorpio). We may find ourselves more dependent upon or obsessed with one of these areas, while not allowing enough room for the other in our lives. In a personal chart analysis we can apply these ideas to whatever is affected in the natal chart.

The total Solar Eclipse naturally coincides with the alignment of Sun and Moon, thus begins a new lunar cycle with Sun and Moon in Scorpio. As they are currently at the very end of sidereal Scorpio, the Sun will spend most of this cycle in Sagittarius, so we will experience a Sagittarian cycle with some Scorpion flavor. In the Sagittarius cycle we feel the radiant power of the Sun, and our inner power, fulfilled by acts of service and charity aligned with our highest beliefs. Sagittarius is a fire sign (a sign for action) ruled by Jupiter (principles, beliefs, and higher teachings). The Scorpio flavor will remind us that all actions and principles are also vulnerable to change, and this could allow us to find some growth around our inner-most core beliefs.

On December 21st, the winter solstice, Jupiter and Saturn will have an exact conjunction at 6 degrees 21 minutes of sidereal Capricorn, owned by Saturn himself. Though they align in the same sign every 20 years, this is the closest visible conjunction of the two in nearly 800 years. The last alignment was in May of 2000, a powerful transition point that ushered us into a new century, a new age of technology with the boom of the internet, and soon after a major change in the tone of society and world politics with the events of September 2001, including a major economic downturn.

The position of Saturn here in his home sign has put a lot of pressure on society already, and is largely related to the global pandemic and the continued constraint that we feel across the world and in our individual homes as well. With Jupiter entering Saturn’s sign, he attempts to bring some understanding, some learning, and some principles for us to work with as we navigate the stern imposition of Saturn in our lives. Can we learn anything from this? Can we check in with our beliefs and make sure that we are acting in accordance with them? Can we act in favor of these and in ways that are responsible towards our long-term goals, rather than frivolous? 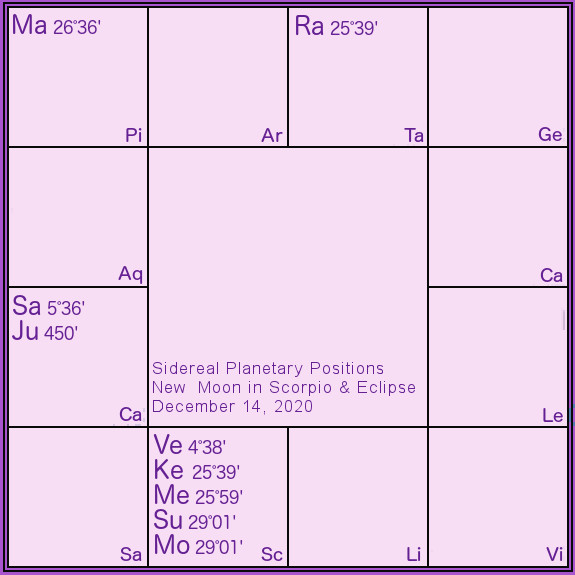 The challenge is that, in Vedic thought, when two planets come very closely together, within one degree, it is considered a graha yuddha or planetary war. Who wins? Well, Jupiter is in fact much brighter in the sky, giving him a strong advantage at claiming our attention. But Saturn has proved incredibly strong right now being in his home sign of Capricorn. When two planets are at war, both will suffer to some degree, and their power in our lives may temporarily wane.

We may find that our principles, beliefs, and ideas don’t even feel like they are inspiring us or filling us with the faith we are seeking at the moment. And our efforts to stay strong, determined, and persevering through the shut down—and the other challenges in our lives— may feel depleted. Hold tight! The planetary war between these two runs from December 12th through December 30th.

Since this war is occurring in the 10th sign, hence the 10th house for a world chart, it relates strongly to government. The outright war for power between political figures in the U.S. may not subside until after December 30th, though we can admit it is hurting both sides and the governmental authority itself.

In our own lives, we may find things ruled by Jupiter and Saturn, the associated people, and the houses aligned with Scorpio, Taurus, and Capricorn may all be facing challenges during this month. Within all this there are learning opportunities offered by the planets, if we work to get to know them better and the highest purposes that they have to offer us.