Full Moon in Taurus on Thanksgiving

The Moon is waxing towards its brightest point, to align fully opposite the Sun for a full Moon in Taurus at 9:39 pm PST on Thanksgiving night, Thursday, November 22nd. The Moon will be in its sign of exaltation in early sidereal Taurus, in the Vedic nakshatra of Krittika, opposite the Sun in Scorpio. Mars, Jupiter and a retrograde Mercury all aspect this full Moon, while Venus rules over it in Taurus. With the Moon and the mind happy and grounded in this fertile earth sign, this is truly a fitting time to let the heart settle and give thanks for what is.

We began this lunar cycle with the Moon dark and approaching debilitation, on November 7th. The Moon is fully “debilitated” in the third degree of Scorpio (although Sun & Moon conjoined to begin this cycle near the end of Libra). In the passionate water sign of Scorpio, the mind becomes aware of its most sensitive points, and can go through turbulent emotions as it rides the waves under Mars’ rulership.

Moon is considered “exalted” in the opposite sign of Taurus, where we find this week’s full Moon. Taurus is an earth sign ruled by Venus. The earth element helps our minds and hearts to find more stability and become grounded, and our emotions are less likely to be tossed about by external forces. Taurus is ruled by Venus, the planet that ultimately helps us to find ways to be happy, so there is a natural inclination towards seeing the beauty and harmony of life when the Moon is here.

Venus is still transiting his own sign of Libra, and getting gradually stronger as he picks up speed after six weeks in retrograde motion. (Though feminine in nature, Venus, like all planets in Jyotish, gains a masculine pronoun when personified.) Venus helps the mind to be happy when the Moon is under his rule, because Venus drives us towards pleasure and happiness, and helps us to look for and see beauty. This is a great outlook for approaching the Thanksgiving holiday, especially when difficult family dynamics may be present. On this holiday where there is a tendency to overindulge in consumable pleasures, however, be especially mindful this year, as Venus (and Jupiter) could help to push that to extremes. 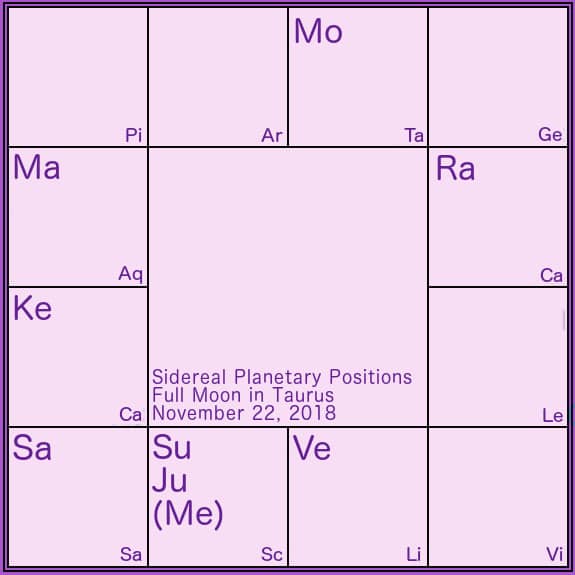 Within the Vedic system, Krittika nakshatra spans from 26°40′ Aries to 10° Taurus. This star-sign is known as “the cutter” and is represented by an axe, a razor blade, or a flame. Agni, the Lord of Fire, rules here, and his sharp and transforming nature drive the energy of this nakshatra. Though we are experiencing the beauty-seeking nature of Venus, we are also receiving the purifying and sattvic influence of the Sun, who rules this nakshatra, while the Moon transits here.

This nakshatra can be located in the sky as the cluster of seven stars also known as the Pleiades. In Vedic mythology, these correlate with the wives of the seven sages who found and nursed the baby Kartikeya, the son that Shiva and Parvati birthed through the vehicle of the river Ganga. There is a maternal and nurturing quality to this star, in addition to its power to help us to cut through the unnecessary in our processes of purification. Fittingly, the Indian saint “Amma” (Amritanandamayi) was born under Krittika nakshatra, and demonstrates these qualities of being a nurturing mother to all as well as a powerful sattvic purifier.

In addition to full illumination from the Sun, this full Moon is also receiving light and energy from Mars, Jupiter, and Mercury (though Jupiter is quite combust, within three degrees of the Sun). Mars’ influence can stimulate the mind into a more rajasic state, and can add a bit of heat and tension. With Mercury also in retrograde motion, be very aware around getting into arguments or trying to explain (or re-explain) your point of view to others. Though Jupiter sends some benefic and inspiring influence, the loftiness of your ideas may be burned up and lost as you attempt to communicate from a philosophical or idealistic place. Mercury will continue in retrograde motion through the next New Moon, on December 6th.