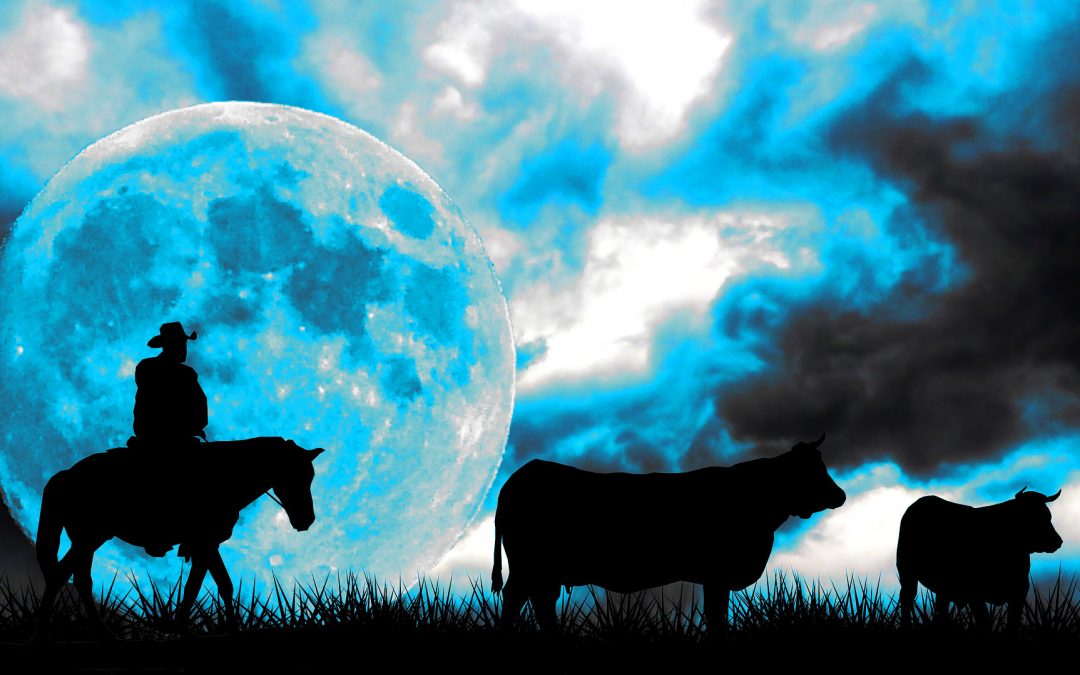 The Sun and Moon are getting closer and closer as we head towards a Dark Moon night this coming Wednesday. The New Moon in sidereal Cancer will be exact on July 31st at 8:12 pm PDT. This completes the previous lunar cycle which brought on the eclipses that affected many people in deep ways, especially those running dashas of Rahu or Ketu.

The Cancer cycle could be a chance to cool down a little and come back into the heart after the heady and philosophical cycle of Gemini-Sag, with all the added eclipse energy. Cancer is the Moon’s sign, the sign of the Divine Mother and her nourishing waters. Spend time in a body of water this month, and connect with your own internal waters (feelings!) around this New Moon. Cancer is the fourth sign naturally, relating to the heart and the breasts, and is feminine or yin, helping us to direct our energy inwards.

Within Cancer, the Sun and Moon are joining in the Vedic nakshatra called Pushya, meaning “the nourisher.” Symbolized by the udder of a cow, this star-sign gives a sense of abundance and sustenance. It can elicit a strong sense of family and responsibility, relating to both the divine mother and the divine father. Its deity is Brihaspati, a form of Jupiter who showed generosity and unconditional fatherly love in the story of how he adopted Mercury (a love child between his wife and the Moon). Fertility is strong under this star, and could be throughout this Moon cycle. 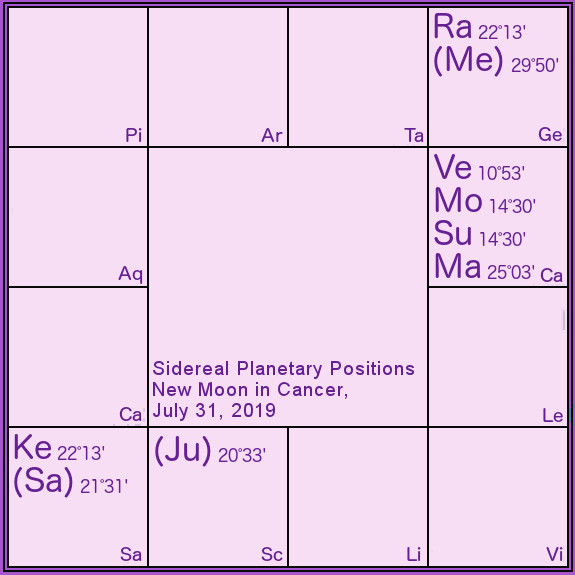 Mars is still traveling in Cancer, his sign of debilitation, for another week until he enters Leo on August 8th. Mars-ruled folks may feel their usual fight and fire is diminished, or that they’re needing more comfort and cuddling than normally.

Venus is also transiting through Cancer. He is already traveling fairly close to the Sun, but he’ll enter the highly combust zone (within 3 degrees), on August 3rd. With Venus so close to the Sun, we may find some of our worldly pleasurable pursuits feeling “burned up” by the purifying power of Surya. Relationships could be under a lot of pressure, or it may just be so hot where you are that it’s hard to enjoy anything. Venus reaches total combustion when he aligns with the Sun on August 14th, and won’t leave the 3-degree proximity zone until August 24th. (Looking at a 6-degree orb, Venus won’t leave combustion until September 4th.)

After several months, Jupiter is finally slowing down in his retrograde journey back through Scorpio, and will station and turn direct on August 11th. As he begins his journey forward once again, you’ll notice affects the most directly on the areas of life ruled by Jupiter in your chart, and depending on the unique placement of planets for you. In a general sense, we may notice things changing directions somewhat in the broader ideological field, as we have had a period of retrospection over principles and beliefs for the past several months.

This New Moon finds all the planets in between the two nodes, on one side of the sky, creating a Kala Sarpa alignment. We’ll come under this alignment for half the month from now through December. When the Moon is on the same side of the nodal axis as the other planets, Kala Sarpa is on, and when he transits from Capricorn through Taurus, it is off. This can intensify the effects of the nodes, especially for those who have prominent nodal placements in the natal chart, or are running cycles of either Rahu or Ketu, bringing shadow work and intensity to the surface.

Mercury is completely stationary at the time of this New Moon, turning “direct” less than an hour after the Sun-Moon conjunction. For those of you who have felt the Mercury Retrograde effects strongly this month, you can breathe a sigh of relief!

This is a great time to have a personal reading– either an Initial Reading if this is your first time working with me, or an Eclipse Reading, if we have had a previous session, can help you to integrate the lessons that arose during the eclipse cycle.